Vegan Beans from Around the World: Book Review 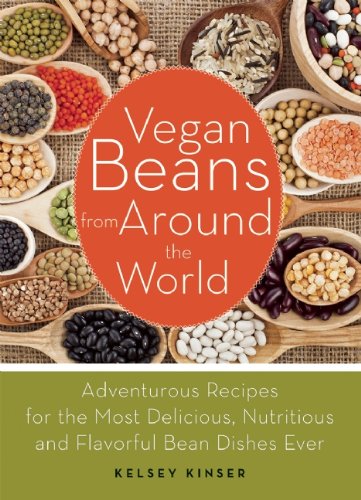 Good morning!  It is a beautiful Monday.  We had a fabulous weekend except for me dropping my smart phone in the toilet.  Oh yes I did.  It's toast.  I am trying not to dwell on it.  It totally sucks, but in the grand scheme of things, it could be worse.  Still shitty though.

I'll use the toilet talk to segue into talking about farts...I mean beans!

I love the musical fruits.  All of them.  I think beans are awesome.  Not only are they absolutely delicious, but they are also incredibly healthy, versatile and inexpensive.  How can you beat that?  Frankly, I think they are probably one of the healthiest protein sources (one of the many reasons I think the Paleo diet is silly).

So I was happy to review Vegan Beans from Around the World. The subtitle is Adventurous Recipes for the Most Delicious, Nutritious and Flavorful Bean Dishes Ever.  That sounded like just my kind of thing!

This is definitely a good book for someone new to cooking beans as it explains how to soak them, cook them, etc.  The recipes, however, are not necessarily for a new cook or someone with a timid palate as they are highly spiced and seasoned (which I love!).

The soup, stew and salad chapter is definitely the best.  I think I want to try making almost all the soup and stew recipes!  There is a section dedicated to garnishes, sides and snacks that also includes recipes ford making vegan cashew sour cream and tofu sour cream.  This section also has a recipe for chickpea chips, crunchy roasted chickpeas, and green bean fries, that I would love to try.

The chapter on main dishes is good too, but less interesting, and its in this chapter that my excitement started to fade.  To these supposedly most nutritious bean dishes ever there is a whole heck of a lot of refined flour bread crumbs, white rice, and added sugars.  Some of the curries look very yummy though...I would love to try the green bean curry as that is one of my favorite dishes from the Indian restaurant we order from.

The final chapter is drinks and desserts.  The black bean brownie recipe looks good, although I would swap out the sugars for a healthier sweetener.  There are several soy milk recipes but that doesn't interest me much.  None of the others are really appealing to me but are interesting none-the-less.

Overall, its got some very interesting, yummy sounding recipes, I would just make healthier substitutions in the recipes calling for refined grains and sugars.