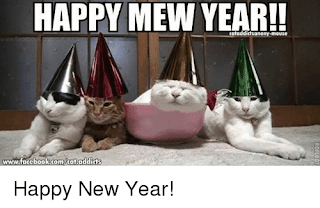 I thought I would give you a bit more info about what's been going on around here. I haven't had much time to write personal posts. At this point, its been challenging for me to post even once a week.

The reason for my lack of time is mostly good. My counselling practice really exploded this year. Because I am self-employed, and because I enjoy my work, its been tough to set limits though, so I find myself seeing clients, either in person or virtually/by phone often 7 days a week. I do get to set my own hours, and I never see more than 6 clients a day, but it is still pretty exhausting. Nevertheless, I couldn't be happier. I love my work so much and I feel so blessed to have a job that is on my terms and provides me with so much intrinsic satisfaction. I am still doing a lot of fertility/infertility counselling as well as couples counselling, CBT for anxiety and depression, and EMDR for trauma.

I have developed a bit of an addiction to cat videos. When the girls were little I really had no interest in pets, but now that they are more independent, my obsession with felines has come back. I know I will not likely ever own cats again (not only is Adam allergic, but he doesn't like animals. Period.), so I have to indulge my obsession by living vicariously through others. I admit its a problem, I could look at cats and kittens being cute for hours. I may need an intervention.

Health-wise, I am still struggling with chronic atypical migraines. Earlier this year my doctor gave me an Rx for medical marijuana (CBD oil without THC). It seemed to help for a bit then stopped helping. At this point, the only thing I have not tried is Botox injections which I will discuss with my doctor in the new year. The past couple months I have had a lot of them but I don't ever let them stop me from pushing through with things. I am just kind of used to the pain.

I am pretty happy with my fitness and nutrition. I am the strongest I have ever been and for the past year I have had no issues with IBS that I used to struggle with. I am eating lots of protein (all kinds except red meat very rarely) and get most of my carbs from sweet potatoes (I am obsessed), squash and oats. I have also made a point of eating more fatty fish like salmon and herring and still go though huge quantities of tahini because its the best! I have also really fallen in love with Greek yogurt and have been eating it way more than I used to (or any kind of yogurt for that matter). I stick with plain and flavour it myself with fruit, natural extracts and/or stevia.

For the past year, the girls have been getting along so much better. They no longer fight 24/7 which is such a big relief as I think Adam and I were ready to lose our minds. Big A started middle school (7th grade) in September and is preparing for her Bat Mitzvah in June. She does 4+ hours of dance a week, swims, and plays basketball at school. At just 12, she is taller and heavier than I am and looks much older than she is.  We have a full on teenager here!

Little A is in 4th grade and is as feisty as ever. She is a bit too much of a perfectionist which means she can come down hard on herself and on others. Its something we are trying to keep an eye on, but so far she is doing great, excelling in school, her extracurriculars and her social life. She insisted on starting piano lessons this year (on top of ballet, Girl Guides, swimming, Hebrew School, soccer, etc.) but has surprised us by her dedication (we will see if it lasts).

I haven't given much attention to my konjac business, but there are some excited developments in store for 2019 as I have some new business partners. We will be relaunching the brand. Its been a slow transition but I think a lot of things will fall in place in 2019.

I am off now for a little holiday but I will be back in January. Happy holidays to you all!
Posted by Healthy Life Lessons at 7:43 AM No comments:


Its not often we can find some form of entertainment for the whole family to enjoy. The girls do not share the same musical tastes as Adam and I, who also don't always have the same taste in music. Moreover, I hate going to see live music period. Adam is the trooper who will accompany the kids to see their favorite performers.

When it comes to movies, the girls rule the roost in this house. Adam and could probably count the adult movies we have seen since becoming parents on one hand. We generally only go to movie theaters so the kids can see something they want to see. Fortunately, kids movies/animations can occasionally be enjoyable for adults too these days.

I am not much of a live theater fan, in general, but, again, if I am going, its typically because we are going to a show the kids want to see.

I have less than zero interest going to see sporting events, so again, that is something Adam does with the girls. I have also taped out when it comes to the CNE (Canadian National Exhibition) and any other even involving rides, crowds and line ups.  Add horrendous traffic and the expense of parking in Toronto and you have a mom no longer in really going to any attraction in this city. I know understand why my parents love living in the smaller city where I grew up!

We used to take the girls to farms outside the city for their holiday special events on Thanksgiving, Easter, etc., or to pick fresh fruits and veggies, but I think we've all grown tired of that at this point.

One thing I have always wanted to do, is see Cirque du Soleil. I suspected the girls would enjoy it too since they are very involved in gymnastics, dance, and both attend circus camp in the summers. They were enthusiastic when I suggested it, so Adam and I bought us tickets for the next show coming to Toronto, called Corteo.

We attended a matinee performance this past weekend and I am happy to say it was a success. Or relatively so, in terms of finding some form of entertainment we can all enjoy.

Usually getting anywhere in this city if is a nightmare, and parking even worse, but this went all relatively smoothly - albeit expensively as parking for 3 hours cost $30 - near the Scotia Bank Arena, where it was held.

The reviews for Corteo were mediocre, with most of the criticism being the weakness of the story. Frankly, I didn't even expect a story, I was just there for the acrobatics, and in that regard, at least for me, it didn't disappoint.

I was surprised by how nervous I got for the performers doing such dangerous stunts. I had to cover my eyes a few times, worried they would fall. Little A kept patting my hand and reassuring me, "Momma, they practice a lot, they'll be okay."

It was about 2 hours with a 20 minute intermission. The intermission was when Little A started whining that she was bored. But I suspect she was actually grumpy because we refused to buy her food to eat since the prices were absolutely outrageous ($5 just for a bottle of water, and $8 for a small bag of chips!). But we'd already promised to buy the girls dinner on the way home so we didn't have much time for her complaining.

While Corteo may not be the best Cirque production (I have nothing to compare it to), I did find it entertaining and it has no live animals which makes it suitable for those concerned with animal rights in circuses. The Cirque travels around the world so if you think your kids would enjoy it, I definitely recommend you check it out. That being said, now that we've done it once, none of us feel the need to see it again. One and done.

Posted by Healthy Life Lessons at 4:43 AM No comments: 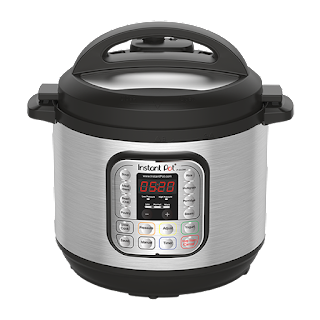 Do you have an Instant Pot? Do you know what an Instant Pot is? If you like cooking, or maybe if you hate cooking but try to find motivation to avoid takeout, you do.

Its a recent (Canadian) invention that has taken the cooking and food prep world by storm. It is a multi-function, small appliance that can pressure cook, saute, steam and more. It is programmable and can cut down dramatically on the time required to prepare all sorts of different dishes.

I do not have one. Why? The reason is that I just don't feel the need at this point in time. I have used the slow cooker we got as a wedding gift once in almost 18 years.  But I have family and friends that are obsessed with it.

For that reason, I agreed to review the 5-Ingredient Instant Pot Cookbook by cookbook author, Marilyn Haugen. 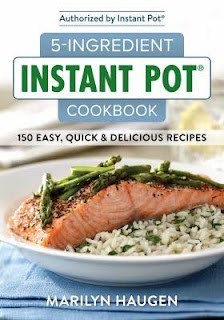 People who like simple recipes and/or are short on time will appreciate the simplicity of these recipes.

The first section of the book provides tips and information about using an Instant Pot. The following section is"Instant Pot Staples" and contains recipes such as broth, and stocks, quinoa, brown rice, marinara sauce and BBQ sauce. I know a lot of people find cooking brown rice daunting because it can take a long time and end up too chewy or too mushy. In the Instant Pot, it takes less than 30 minutes, which is pretty impressive. Though you still have to soak dried beans, you only need to cook them for a few minutes! That's amazing.

Each recipe includes tips and many have variations as well. But only a handful are photographed, so this book isn't great for people who need visuals.

This isn't a healthy cooking book so things I try to avoid like added sugar and refined flours show up in some recipes, but you can probably make substitutions. It also is limited in terms of vegan/vegetarian recipes but is great for anyone who eats a varied diet.

A few standouts are "Almost Rotisserie Chicken", "Maple Rice Pudding" and "Hearty Steel-Cut Oats" which all cook in much less time than conventional recipes.

So do I plan to get an Instant Pot? Nope. But I do recommend this book if you have one. There are 150 recipes that cover the gamut and are all relatively simple and easy to follow. I am going to give my copy of this book to my sister-in-law who has an Instant Pot, and adores it. I know she will love it!

Posted by Healthy Life Lessons at 5:42 AM No comments: