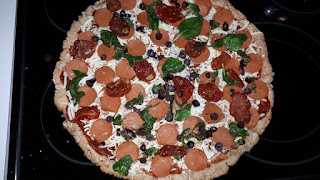 I love making pizza. I mix it up in terms of what type of crust I make. Sometimes a traditional yeast crust, sometimes a base of cauliflower, sometimes gluten free...but always healthy, of course.

But lately, life is so busy I haven't made it very often because it tends to be pretty time consuming. This is one reason I adore this recipe. It is not only healthy and super delicious, it is also pretty quick and easy.

All you do is mix equal parts self-rising flour (I make my own whole grain version) with plain Greek yogurt. If you are vegan or need dairy-free, I am sure you could make it with a coconut milk Greek yogurt. You could probably also use gluten-free flour if necessary. I used organic, whole grain spelt for these ones.

For the pizzas pictured above (equivalent to 2 extra larges, one regular, one thick crust), I used 5 cups each self-rising flour and Greek yogurt.

Mix together flour and yogurt in a large bowl and use hands to press into a ball. Divide into desired number of portions and press out onto greased baking sheets. Bake naked in oven at 400F for about 20 minutes (less if making thin crust), then top with sauce, cheese and toppings, and then return to oven for another 10 minutes. 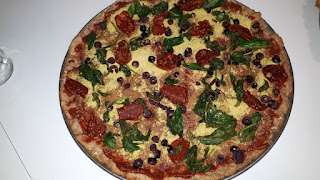 As you can see, on the pizza above, I used nutritional yeast instead of cheese. It was my first time trying this on pizza, and I absolutely loved it!!

I think my go-to from now on is this crust recipe, and using nutritional yeast.
Posted by Healthy Life Lessons at 4:10 AM No comments:

If you are at all into cooking and/or nutrition, than you likely own a high speed blender.

There are now numerous companies making them, but the two most popular brands are Blendtec and Vitamix.

About 6 years ago, Adam bought me a Blendtec for my birthday. I asked for it specifically, over a Vitamix, based on reviews I had read. The deciding factor for me at the time, was that many people suggested the Blendtec was easier to clean. 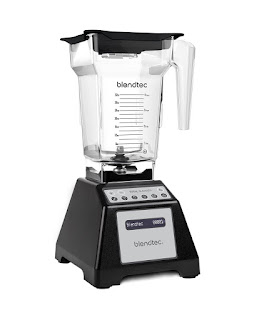 After having owned many food processors and blenders that suck to clean, this was very appealing for me.

Despite the Blentec's motor dying much sooner than I think it should have, overall we were pretty happy with it. It was used multiple times daily. I used it to crush ice and make coffee frappes, make batters for baked goods, sauces, purees, etc., and Adam and the girls used it primarily for making smoothies.

That being said, I didn't love cleaning it...but I probably won't love cleaning anything ever, to be honest. Food would get caught under the blade, and unlike our food processor, the blade wasn't removable. But it was not sharp, so I could often reach in and push food that was stuck with my bare fingers.

One thing I was very disappointed about was its ability to make nut butter. I had high hopes but after a few totally failed tries, I gave up.

The Blendtec had preprogrammed settings, like Ice Crush, Batters, Smoothies, etc. Sometimes they worked great for their intended purpose, other times, another setting would actually work better.

The Blendtec was also LOUD. Like really F#$*ing LOUD!

So a few months ago when it died, I decided to switch camps and try a Vitamix.  We got the Vitamix Explorian E310 Blender, which Adam got a good deal on at Canadian Tire.

At first it took us all a bit of time to get used to it. It has no preprogrammed settings, so when I turn it on, I forget I have to turn it off, because the Blentec settings had timers and would go off automatically.

It is just as easy (or not easy) as the Blendtec to clean, however, the blades are super sharp, so you definitely cannot stick your hand in to clean it out.

Like all high power blenders, it is loud, but I don't think its as loud as the Blendtec, which is a welcome change.

I tried nut butter and the first time was a total disaster. A second attempt led me to realize you just can't more than about a 1/2 cup of nuts in at a time. Given its large size, I find this very annoying. I had 4 cups of almonds and it was extremely time consuming and messy to do so many individual batches. I am going to stick to store bought nut and seed butters for now.

The Vitamix we got does have a pulse button, along with the continuous power button, and a speed control. But we tend to just blast the shit out of everything on the highest speed.

Overall, I think I do prefer the Vitamix. That being said, it remains to be seen if it lasts longer than the Blendtec!

Posted by Healthy Life Lessons at 4:41 AM No comments: 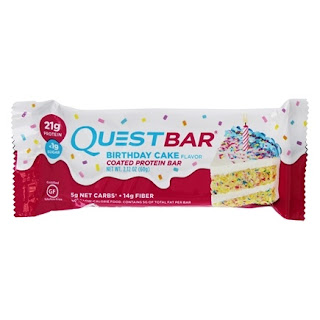 Recently a lot of the online stores where we buy a lot of our protein powder, protein bars and pre-workout drink mixes have been having massive sales. This has prompted me to get more adventurous in trying new products and flavours. After getting the Maple Waffle flavour of Quest bars on sale and loving them so much, I went back to buy more but found only a few other flavours were still available, one being Birthday Cake.

I hadn't been considering trying them before because I read a mediocre review of them, and I had been very disappointed by the version made by One Bar (whereas their Glazed Donut flavour is AMAZING!) that looks like a big unicorn turd and made a mess of sprinkles everywhere.

I didn't really have high expectations for this Quest flavour, but I was really pleasantly surprised! I think I like it even better than Maple Waffle, and for sure like that its not sticky/messy like the Maple Waffle one, so I bring it to work or take it as an on-the-go snack.

Its not overly chewy, but also not too soft. The sprinkles are kind of within the creamy, white coating so they don't make a mess anywhere. I have avoided any coated Quest bars in the past, but I really don't mind the coating (vanilla frosting-ish).

I can't believe I am saying this, but I am done with Chocolate Chunk altogether. This is now my absolute favorite flavour!
Posted by Healthy Life Lessons at 4:42 AM No comments: 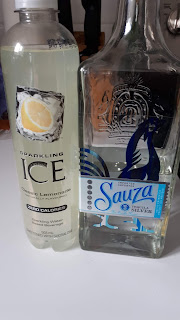 A few years ago I was lecturing my dad on cutting back on his alcohol intake (I am pretty much always lecturing him about his food/drink intake) and he said to me, "Come on, red wine is a health food." I may have starting yelling at him.

No. Alcohol is not health food. Forget the BS about it cutting heart disease risk. The research findings were exaggerated and we now know that too much alcohol for anyone is bad. Very bad. Men should have a max. of 2 drinks/day, and women less.

Believe me, if it was health food, I would have a few drinks a day. But its not, so I allow myself a few on the weekend, usually while making dinner. That's it. And when I do drink its usually craft beer, cider or occasionally wine or spirits. When it comes to spirits I stick with clear like vodka or tequila and sugar-free mixers.

The worst thing you can possibly drink is stuff mixed with sugar syrups, juice, creamy and/or sweet liqueurs, etc.

I usually make my own mixer with carbonated water from our Soda Stream, some muddled lime and a bit of stevia, but I always like to try new  things, so I was thrilled when Sparkling Ice sent me their array of products, including their 2 newest flavours, Classic Lemonade and Pink Grapefruit and suggested using them as mixers.

Pink Grapefruit has been a longtime go-to flavour for me (I love pink grapefruits), but it wasn't appealing to me as a cocktail. Instead, I combined the Classic Lemonade with tequila, carbonated water and lemon slices.

It was really amazing! The lemon slices added a bit more zing and the combo of the Sparkling Ice and plain soda water was the perfect level of sweetness.

Here is the recipe:

Of course many of their other flavours are great too, and my kids love them (we had heavy negotiations over who got what flavours). Yes, we consume diet drinks in this house. I DO think it is a better option than sugary drinks. Believe me, if you think you are being 'healthy' drinking liquor mixed with juice or an organic sugary soda because its 'natural, you are truly delusional.

Do I recommend Sparkling Ice? If you want to cut down on your sugar intake but sometimes want a sweet treat or mixer for your cocktail, than absolutely!

Disclosure: We were sent the products to review but all opinions on this blog are our own.
Posted by Healthy Life Lessons at 8:08 AM No comments: