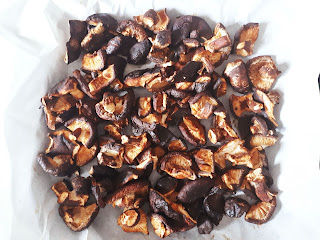 I have to tell you, I am so over coconut bacon. As I have been very open about in the past, unlike many folks in the wellness world, I don't believe coconuts perform miracles. The oil is heavy and greasy. With coconut bacon, its the texture. I once threw a bunch into something I made for Adam and I and he told me it was like eating paper. I have to admit, he's right! I will stick with coconut milk thanks, and everyone else can eat all the bacon and oil.

Anyways, I've seen people use various veggies to make bacon substitutes and decided I wanted to try making one with mushrooms since I not only love them, but they are naturally meaty. I have to tell you, I am completely smitten. I threw these into a pasta dish, but I am already fantasizing about using them in omelettes, salads or just shoveling them into my pie whole as fast as possible. They are ridiculously good. And super easy to make too. The only thing is, you need to get dried mushrooms. Fresh has too much moisture in it. I can get big packs of shitake mushrooms dried at my Korean market for $5. If you can't find them, order them online.

Crumble dried mushrooms into bowl. Add all remaining ingredients and stir well. Let sit until mushrooms have absorbed all the liquid. Bake at 350F on parchment lined baking sheet for about 15 minutes or so, but make sure mushrooms don't burn. Keep refrigerated up to a week.

Posted by Healthy Life Lessons at 10:09 AM No comments: 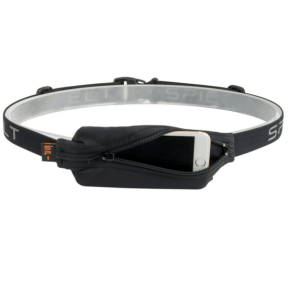 Good morning and welcome to a new week! If you are a fitness fanatic, or are just constantly on the move, or even an avid traveler, keep reading...

Where has a SPIbelt been my whole life??

Who doesn't hate having to find a place to stash keys, phone, etc. when running outside. Personally, I have been stuffing my phone in my bra when I run the past few years, which isn't comfortable and I always worry I will destroy it with sweat.

I do have a fanny pack thingy from when I did the 8 hour cancer charity walk a few years ago, but its huge and bulky, designed to carry 2 water bottles and a lot of other stuff.

So I was more than happy to test a SPIbelt out when offered the chance. Its very small, light and sleek and adjusts to fit snugly and comfortably. It looks tiny but the stretchy material can accomodate a phone and other stuff very easily.

Even if you are not a runner, its a great option for walking, hiking, cycling, and travelling. I am going to take it with me for sure to Israel.

Get out there, get active, no excuses!!

SPIbelts are affordable, and come in a ton of different colours, models, and sizes, including ones that can accommodate water bottles, and one with a waterproof pouch.

Disclosure: I was sent a SPIbelt to review, but all opinions on this blog are my own.

Posted by Healthy Life Lessons at 5:26 AM No comments: 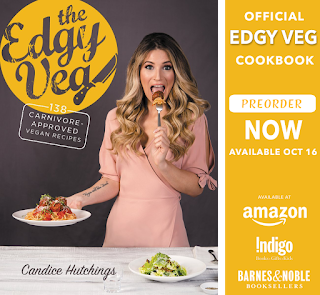 Extremism is in. Whether its political views or diets, everyone is polarized these days.

When it comes to food trends, people seem to be either going over-the-top decadent (the latest in Toronto is Asian ice cream and desserts...like this: 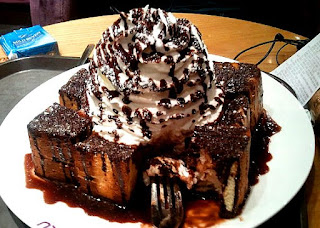 ...or to the opposite end of the spectrum, such as raw, vegan food like this: 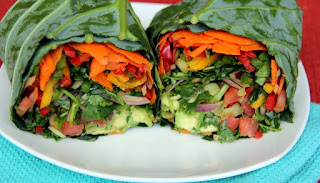 If I have to pick a side, you know where I am going! The latter, of course!!

But there is another diet trend in Toronto, which, I guess is sort of the happy medium: vegan comfort food.

Now, personally, I have little interest in this because I find it tends to mean vegan junk food, and junk food is junk food in my book. It may be better for animals and the planet, but its not better for the body.

Nevertheless, there is clearly a market for it, and I suppose its a good way to get carnivores who have previously given no thought to what they consume an accessible way of becoming more conscious of what they eat, if only for ethical reasons (though I don't get why people would care about the health of animals and the earth, but not of their own body).

The Edgy Veg is a cookbook by fellow Torontonians, and bloggers, Candice Hutchings, and her husband, James Aita, which claims to contain "138 carnivore approved vegan recipes." I would say it definitely can be described as catering to people looking for vegan comfort food. 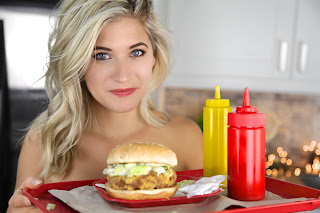 Now that I think about it, the polar opposite of this might be Paleo since that tends to be a very health conscious, high meat diet (assuming you believe eating large amounts of animal protein, especially red meat is healthy...which I don't).

Anyways, there is a lot to like about this book. It begins with a section on how to prepare to start cooking the recipes, with lists of kitchen tools, pantry staples,  and vegan substitutions. Then there is a chapter on the 'basics', such as pizza dough, seitan, vegan mozzarella, several types of veggie bacon, dairy-free sour cream, and a bunch of sauces. These items turn up as ingredients in a number of the recipes later on. I love that these base items, such as seitan and vegan mozzarella are relatively simple, since making them homemade might seem intimidating (at least to me!).

There are lovely photos of almost all the recipes and tips under the "Hack it" section at the bottom of the pages. Many of the recipes sound amazing and I plan to try such as the mushroom bacon, Eat the Rainbow slaw, Buffalo Cauliflower Wings 7 ways, What the Pho, and Garlicky Green Beans to Keep the Vampires Away.

The recipes span many different cuisines, and cover most of the food that's trendy (at least in Toronto) such as pho, ramen, Chinese/Thai/Indian, and fusions of many of them. Their are chapters for brunch, soup, salads, munchies, mains, sides, beverages, and desserts.

My one criticism is that many recipes use white flour and white sugar. Even organic versions of refined flour and sugar are absolutely void of nutrition and spike blood sugar levels. Nevertheless, you can substitute whole grain flours and healthier sweeteners in most of these recipes easily.

Also, be aware that substitutions for animal proteins are sometimes made with non-proteins (i.e. buffalo cauliflower, carrot lox). So be aware that you will likely have to add a protein somewhere else in your meal.

Do I recommend this cookbook? Absolutely! The recipes are approachable and appealing to even picky, closed-minded carnivores. Its perfect for people scared to eat vegan because they perceive it to be nothing but sprouts and seeds. Good job by my fellow Torontonians!!

Disclosure: I was sent this book to review but all opinions on this blog are my own.
Posted by Healthy Life Lessons at 5:15 AM No comments:

Here are some things I've been loving lately... 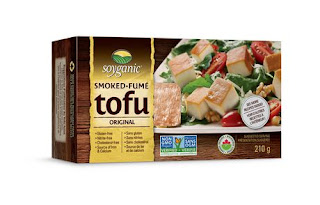 Soyganic smoked tofu! The siracha is spicy and delicious, but I also love the black pepper garlic. I've been throwing them into stir fries like crazy. The plain smoked makes for a delicious sandwich. Honestly, you can't do better for an affordable, healthy and yummy source of protein. 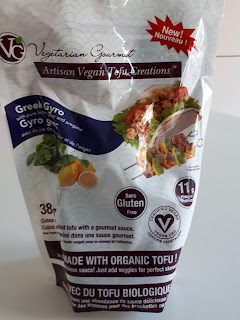 Oh and this marinated tofu from Vegetarian  Gourmet is good too. I have only tried the Greek gyro variety so far, but really liked it and would gladly try the other flavours. 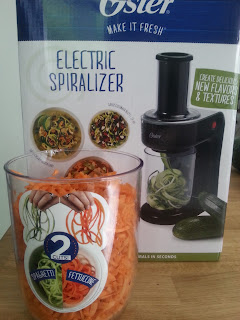 My electric Oster spiralizer!! I got if for Mother's Day, but didn't use it a ton over the summer as I don't spiralize for salads much, but do like to make veggie noodles for hot dishes. I know I am going to be using it a lot over the winter and I made a yummy vegan zoodle dish last weekend that Adam and I both enjoyed.

Is it obvious that I derive a huge amount of pleasure from cooking and eating??

I am also loving this hair conditioning treatment from Pantene. My hair is ridiculously dry so I am always looking for good moisturizing products, however, I have to avoid things that are too oily or heavy, because my hair is fine too. This stuff does a really good job of smoothing down my frizz, though I don't find the effect lasts after you shampoo the next time. 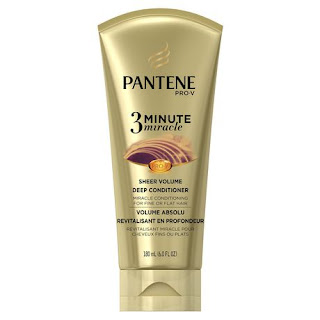 We have had more summery than fall-like weather so far, which has sucked for me because my favorite time of year when the air cools and the leaves change. Fortunately, today is the first day when the forecast is for actual autumn weather. Happy hump day!!

Posted by Healthy Life Lessons at 4:46 AM No comments: 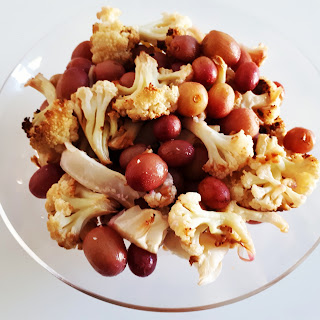 Geez, how long has it been since I posted a recipe here?

Its not because I am not constantly cooking and baking up new things, its just all going on my Konjac for Life website and Instagram page.

But here is one for you. As you know, I adore roasted veggies, but a lot of fruits can also be roasted too for awesome results. This dish combines the two giving you a delicious sweet, savory recipe that's simple and flavourful.

I've made it a few times now for dinner parties, because its a little different than the usual stuff. Its low calorie, nutritious, high in fibre, gluten-free and vegan!

Steam cauliflower a few minutes until tender crisp. Transfer to large bowl and toss with olive oil, garlic, salt and pepper. Spread on foil or parchment lined baking sheet and roast at 375F until it starts to brown. Add grapes and cook another 10 minutes. Remove from oven and transfer to serving dish. Toss with balsamic and serve warm or room temperature.

Enjoy!
Posted by Healthy Life Lessons at 4:44 AM No comments: