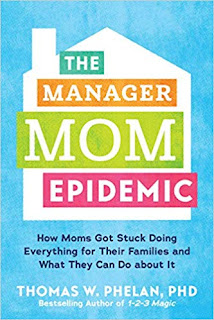 Have you heard of emotional labour?

It is the invisible labour done mostly by women to manage a family and household. It goes beyond just the physical tasks of cooking, cleaning, etc. and involves the planning involved in making meals, scheduling appointments, dealing with homework, registering kids for camp, activities, etc.

Even in heterosexual couple-led households where men do a fair share of the housework, it is most often the women who do most, if not all, of the emotional labour.

I am very lucky in that this is not the case in our household. Adam is more involved in the emotional labour of caring for our children and household than any other man I know, and probably takes on more than I do. But this is not the case for most of my friends nor my clients, and it can be a huge source of stress, frustration and resentment for women.

The Manager Mom Epidemic, is a book that addresses the inordinate share of emotional labour women shoulder at home. I have to admit, I was quite surprised that the book is written by a man, clinical psychologist and author, Thomas W. Phelan. But having spent many years counselling parents and families, Phelan has a very clear understanding of the dilemma.


In Part I of the book, Phelan defines the problem and explains why it is so prevalent. In Part II, Phelan explains the various tools that can be used to rectify the problem in a household. In Part III, the author uses a number of case studies to illustrate how particular challenges can be solved, and Part IV is prevention strategies for those couples who have not yet developed the inequitable division of labour.

The book is easy to read and extremely detailed in its advice on how to implement change. Even for a household like ours, there was useful information. Adam and I are definitely guilty of 'automatic talking', which is Phelan's name for nagging. Apparently nagging children does not at all work to motivate them to listen. Yeah, pretty much, right? But most of us parents do it anyways. Phelan explains why it doesn't work and how it becomes a vicious cycle of frustration between parents and children, and provides alternative ways to engage children in domestic chores.

One of the big arguments Phelan makes is that the reason why parents nowadays feel so stressed out and 'busy' is because we coddle our children and do not get them to take more responsibility for themselves. Yup, definitely true.

So do I recommend this book? Absolutely!! Phelan even provides strategies for women who's husband's are resistant to taking on more of the load and how to communicate to them. Like I said, he really seems to get it!

Disclosure: I was asked to review this book but all opinions on this blog are my own.
Posted by Healthy Life Lessons at 4:34 AM No comments: 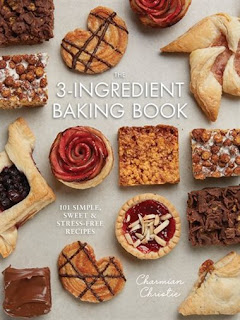 I have always loved cooking and baking, but I started out as a baker, making both messes and marvelous things in the kitchen from the time I was about 5-years-old.

But many people, even those who love to cook, find baking intimidating. I have never understood why. Sure, there are certain things that can be tricky and require precision (pastry, souffle, etc.) but I have always found baking to be more forgiving than people often claim it is. After all, I rarely ever use recipes and just create them as I go, and for the most part they turn out great (I have had a few major failures, but that's all part of the learning process!).

I also love baking because many of the ingredients are non-perishable, so I generally have them in the pantry at all times. If you shy away from baking because it scares you but would love to overcome your fear, The 3-Ingredient Baking Book may be the perfect resource to help you get started.

The book is the latest one written by author, blogger, and fellow Canadian and cat lover, Charmian Christie, AKA the Messy Baker.

Perfect for newbie bakers, the book starts with a section outliving the necessary kitchen equipment, ingredients and pantry staples necessary for the recipes in the book. There are also some trouble-shooting tips.

Then there are sections for each of the following categories:


Now, some of the single ingredients in the recipes are products you have made to stock the pantry that already contain multiple ingredients (i.e. vanilla sugar, self-rising flour, etc.), or store-bought ingredients (cereal, chocolate hazelnut spread, puff pastry,  etc.). But most are simple and provide detailed, easy-to-follow instructions.

I would not, however, start with the candy recipes involved candy thermometers, etc., unless this is something you feel ready to tackle right away. Personally, it is still an area in the kitchen that I still feel a bit uncomfortable with. My experiences with candy making have been hit or miss, however, my tendency to modify recipes may have something to do with that. This is definitely an area where you want to closely follow the instructions.

Now, the recipes are pretty classic, which means they are based on sugar, butter and white flour. This is not a nutrition cookbook. Only 2 of the recipes, as is, are ones I would make, and in fact, have made before:

So when I initially finished reading the book and decided to try one of the other recipes, I realized I did not have the right ingredients (I don't keep butter in the house and I never buy generic chocolate hazelnut spread, etc.), so I guess that will have to wait.

Although not all the recipes are pictured, the book does have lovely photos. The recipe steps are thorough and there are lots of additional tips and tricks.

So do I recommend this book? It is definitely perfect for anyone wanting to learn the basics of baking but prefers simple paired-down recipes.

Disclosure: I was sent this book to review but all opinions on this blog are my own.
Posted by Healthy Life Lessons at 5:18 AM No comments: 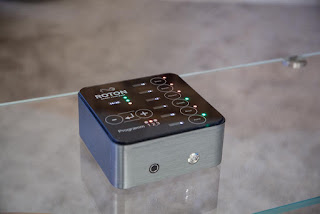 I am very happy. Very very happy.  I have finally gotten my hands on a fitness device I have been dreaming about for years.

Have you heard of EMS training?

Here's some info on it:

Electronic Muscle Stimulation (EMS), is the elicitation of muscle contraction using electric impulses. The impulses are generated by the device and stimulate every major muscle group through electrodes placed near to the muscles being stimulated. The electrodes are generally pads that adhere to the skin. The impulses mimic the action potential that comes from the central nervous system, causing the muscles to contract.

All muscle movement in the human body is activated by electrical nerve impulses originating in the brain and carried along the spinal cord. Each impulse causes muscle fibers to contract creating tension. The tension causes the muscle to flex, which creates movement.

EMS uses electrical impulses that mimic the very same impulses from the nervous system, causing the muscle to contract in a consistent and simultaneous manner. EMS technology enhances the impulse, resulting in a more intensive contraction when compared to classic weight or resistance training. It stimulates, sculpts and enhances all major muscle groups simultaneously, safely and effectively.

Now, if you are thinking this is some silly bogus concept like the 1950s jiggler (I actually saw one at being sold at a garage sale when I was a kid!), you got the wrong idea! 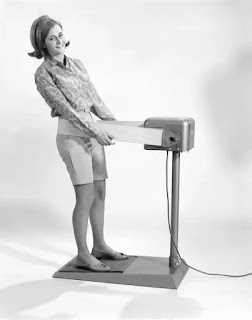 This is not some way to avoid hard workouts while getting all the benefits. It's so challenging that it gives you greater benefits in less time!

I first tried it when reviewing, Lucid Fitness, a training gym, for BlogTO a number of years ago. The owner was the first to offer EMS training in Toronto. I was very skeptical beforehand thinking it was some silly sham, but I was extremely impressed. Later I tried it again at the CANFITPRO conference trade show. Then the doctor who owns the elite women's health clinic I used to work with bought an EMS machine for herself and her clients to use. After trying it again there, I left thinking to myself, I have to get myself one of these.

At that point, however, this was a pipe dream because all the companies selling them only made machines for commercial use - for personal trainers or gym owners and the costed about $30,000. When speaking with a bunch of different companies they all tried to get me to buy one and work off the cost by personal training people on it. But I am a full-time psychotherapist, personal training is something I squeeze in when I can and I don't particularly want to do a ton of it. So I just hoped that one day someone would make a personal version for home use.

Two years ago at the CANFITPRO conference trade show, I asked one of the exhibitors of EMS equipment if they had considered creating personal versions and they said they were in the midst of developing it. About 6 months ago they finally started offering it on their website. I spoke with Adam about it and he agreed I could get it (even the home version is $4,000, so definitely something that requires a spouse's agreement!). It may seem excessive but not when you think that a good treadmill or elliptical machine can easily cost that.

I purchased the home package but let's just say the company-headquartered in Germany, was, unfortunately, dishonest. I never got my machine and my emails just got more promises and requests to be patient, until I ran out of patience. Eventually I did more research and found a Toronto company selling a different version and called them immediately. Within a week I had my new machine from BodyInvest and I am absolutely giddy with excitement already.

The workouts are so intense and efficient they tell you not to do it more than 2x a week. Right now, I am doing lower body once a week and upper body once a week because the muscle soreness lasts so long I don't want to interfere with recovery. But I think it another week or so I will amp it up to 2x a week for each half of my body.

Aside from the machine (pictures at the top) which runs on a battery that just has to be charged after about every 6 workouts by plugging it into an outlet, you get the attachment that runs from the machine to the special suit. Yep, special suit. It basically looks like a wetsuit and it has the electrodes in it positioned at each muscle (biceps, triceps, glutes, quads, hamstrings, chest, core and back). You have to spray the electrodes with water beforehand. I worried getting it all set up would take a long time and one of the benefits I was hoping for was saving time, but after the first 1-2 workouts, I was able to get myself all suited up and ready to go in no time.

If you are a total fitness fanatic who loves to work out at home and is always looking for a better way to train, I urge you to at least give EMS training a try so you know what it's like.
Posted by Healthy Life Lessons at 4:37 AM No comments: