Last night goes down as one of the worst and most embarrassing in my parenting history...except perhaps for this evening.

Of course, I have no one else except myself to blame, because as soon as I picked up the girls from daycare yesterday she was in full-on meltdown mode and I should have known what was coming.  I should have gone straight home.  But instead, I took the girls and a gargantuan amount of food I had prepared to the picnic at a local park for Big A's school.

I was hoping that the playground, other kids, and yummy eats would snap her out of it.  But she was at the point of no return before we even arrived.  Just overly tired, as our little nap-resistant darling is, MOST of the time.  Her behaviour is a perfect example of how critical it is to get sufficient sleep and how simply being tired and sleep deprived can MAKE YOU CRAZY.  It can also make the people around you CRAZY!

She basically shrieked and carried on hysterically the entire hour we were there.  When Adam arrived, straight from work, she was in such a state that he suggested taking her straight home but she kept insisting she wanted to stay.  But one thing after another just triggered massive explosions.  The cake was the final straw.  Someone had brought a chocolate cake covered in bright pink icing - something that drew my girls in hook, line and sinker.  I agreed they could each have a piece after their dinner, but Little A only wanted cake and no dinner.  After negotiating with her, she ate 2 pieces of cheese, a cracker and a piece of watermelon, so I got her a piece of cake.  The minute I gave her the plate she was off again shrieking that it was too small and demanding I get her a new, bigger piece.  When I refused, she became completely irate and out of control.  Adam and I decided to pack it in at that point.  She screamed and howled the whole long walk to the car while Adam and I schleped all our stuff, including her plate and too-small piece of pink cake.  Finally we gave her the cake to eat in the car - which she was now willing to do since she realized it was that piece or nothing - but after one bite she started screaming that she didn't like the pink icing.

We got home, stripped off her clothes, brushed her teeth and put her to bed, no bath, no story, just bed.  For once she didn't call us back. I suspect she fell asleep right away.

Her screaming likely ruined the whole picnic for not only the entire school who attended, but anyone in the park last evening.  Did I ever mention how loud she is?

I am so embarrassed.  I hope no one thinks we are some wacko family...well okay, I guess we are...I know some people were feeling pretty sorry for me.  One mom gave me a pat on the shoulder and said, "You're doing so well, you haven't lost it yet."  Another asked me, "So how much are you drinking these days?"

Ah well, this phase can't last forever, right?  I'm plagued by the fact that Big A's difficult phase lasted from 18 months to 5 years...I think I may be drinking more if she's still like this a year and a half from now!

Here is a picture of Adam and I (in the background) with the girls and my brother's kids.  Can you guess which one is Little A?? 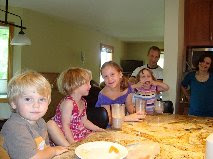 Posted by Healthy Life Lessons at 8:01 AM