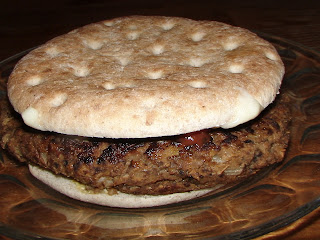 Did ya know that Hulk Hogan is still kicking (throwing people) around?  In fact, he's still wrestling!

I only know this because my sweet, brilliant husband loves wrestling.  Yes, he is an enigma.

I am an omnivore, so I tend to like anything with the word 'burger' in it's name to be hearty and 'meaty', but at the same time I aside from wild salmon or chicken burgers, I generally stick with veggie burgers.  I don't think I've eaten a beef burger since 1995 (I think my residence roomies convinced me to go to McDonalds one morning after a particularly wild party, with the promise that it cured hangovers).

I tend to stick with a few tried and true brands that I buy, but I really wanted to make some myself.   Unfortunately most of the veggie burger recipes that I have seen don't suit my preferences for one reason or another (don't want ones that are 'curry' flavour or made with blackbeans, or are too high in fat, or have too much binder/flour/starch, etc.) and I was scared to come up with my own.  I wanted one that is delicious, of course, as well as low-fat and high-protein.  Just as I was devising a recipe, Susan Voisin of Fat Free Vegan Kitchen posted one that was very close to what I was dreaming up.  Unlike Susan's however, this one is 100% grain-free.  The one thing you do need to make these babies is patience.  It takes time to carmelize the onions and takes time to cook the burgers so that both sides get a crust and will hold together.  But be patient my friends, these are worth it!

Place onions in a non-stick pan or skillet and cook over medium heat, with garlic, vinegar, worcestershire sauce until soft and starting to carmelize (about 15-20 minutes).  Season to taste.  Add mushrooms and continue cooking until they have released most of their liquid and then liquid has been absorbed.  Let cool a bit.  Puree lentils tomato paste and konjac root flour/starch in food processor.  Add onion/mushroom mixture and puree until there are no large chunks of mushroom or onion.  Form into 4 huge patties (or 8 smaller ones, if you wish!).  Place in non-stick skillet or fry pan, sprayed with non-stick spray, over medium heat. 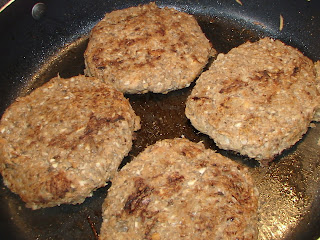 Cook on one side until crust forms and then flip and continue cooking on the other side until there is a crust and burgers hold together.  Serve on a whole grain bun and garnish as desired.

Freeze extras with wax paper in between.  Reheat in fry pan or skillet before serving.

*Konjac is the root veggie used to make shiritake noodles.  If you cannot find canisters of the flour (usually available at low-carb shops), then just empty out the content of 4 capsules (available at most health food stores).

This recipe has been entered into this week's Gluten-Free Fridays on Vegetarian Mamma,  Diet, Dessert & Dogs' Wellness Weekend, and the recipe link-up on Urban Naturale.
Posted by Healthy Life Lessons at 4:28 AM