I have never really labeled myself a "feminist", but going by Wikipedia's definition of a feminist (see below), I definitely am one.

Feminism is a collection of movements aimed at defining, establishing, and defending equal political, economic, and social rights and equal opportunities for women. Its concepts overlap with those of women's rights. Feminism is mainly focused on women's issues, but because feminism seeks gender equality, some feminists argue that men's liberation is a necessary part of feminism, and that men are also harmed by sexism and gender roles.

Feminists are "person[s] whose beliefs and behavior[s] are based on feminism."

Undoubtedly I was brought up in a home with strong feminist beliefs! My mother NEVER told me to get married and have children. Instead, the mantra she repeated to me over and over as a child and young adult was: "Never become financially dependent on a man."

Perhaps that's why the past two years while I've been in school and have become financially dependent on a man (my lovely husband) for the first time have been so difficult for me.

As a child I never felt held back by my gender. My parents had high expectations for me academically and professionally, and dare I say, put even more pressure on me to succeed than my brother.

My teachers did nothing but encourage me. In spite of my attraction to the social sciences and humanities, my high school science teachers (and parents) begged me to go into the pure sciences, because they felt there was a need for more women like me in them. Unfortunately I didn't listen...but we already know about my silly academic/career choices.

In my final year of high school I wrote a critical review paper on Margaret Atwood's novel The Edible Woman. My take on it was that it was too cynical about the role of women in current North American society, that women had come so far by the early 90s, that we should be filled with optimism. I got a grade of 100% on this paper from my English teacher and it won me a top entrance scholarship to university.

A few years later I was less optimistic about gender equality as I embraced Naomi Wolfe's Beauty Myth and by 1997 I was convinced that there had been a full-blown backlash against the advancement of women, and true or not, I was convinced that Ally McBeal was partially to blame. It is around this time that models and actresses began shrinking back to Twiggy-like silhouettes. Previously slender, but healthy looking celebrities all suddenly looked emaciated. Of course, all the actresses on Ally McBeal, at the time, vehemently denied having eating disorders, but since then Portia de Rossi and Courtney Thorne Smith have admitted otherwise and even Calista Flockart has reluctantly admitted she wasn't eating enough (duh, ya think?).

Unfortunately, things in Hollywood haven't changed much since then. The norm for most female actresses is still impossibly thin.

I also feel like the backlash is evident through the 21st century obsession with reality television programs that portray women as shallow, empty-headed, materialistic, man-obsessed, pathetic idiots. Some of these shows portray men in a negative light too, but the focus is definitely on the women. And it's women who eat up these disgusting shows!

There are some incredibly strong, interesting female television characters. I love Andy on Rookie Blue, Theresa on The Mentalist, Alisha on The Good Wife, and my favorite is Jane on the new show Prime Suspect. Of course, these women ALL happen to be absolutely gorgeous (and thin) AND rumour has it that Prime Suspect is going to be cancelled. Do we not have enough of an appetite for strong women?

I have been thinking about all this a lot lately because of this past summer. I am not kidding you when I say that not a day went by, that if I was wearing a sleeveless shirt, I didn't get at least one comment about how muscular my arms are. 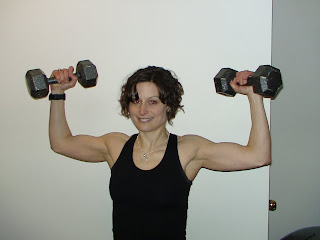 Women would often tell me they wished they could have my arms and men would usually say things like, "Wow, you work out, don't you?"

But the whole thing made me very uncomfortable. Men seemed almost to be mocking me, as if it was cute, that a little woman like me (barely 5'2, 112 lbs) would be trying to be tough, and many of the women's comments felt insincere.

While everyone seemed truly impressed with the amount of work they imagined it must take to have such muscular arms, I am not sure if the men really appreciated the aesthetics and I am not convinced that most of the women would really want to look this way themselves.

After all, most women will work very hard to be thin, but most are not willing to work hard to be muscular and strong. I see it every day in the gym and I've been seeing this for the past 20 years.

Don't get me wrong, I am really proud of my strength. Not because of how it makes me look, but because of what it allows me to do: lift 2 rapidly growing kids, carry massive bags of groceries, haul overflowing garbage and recycling bins up and down our front porch steps. Being strong is about being independent.

Yet the fact that my arms got so much attention this past summer tells me that an obviously strong woman is still unusual AND I would argue it is not the ideal. If it were, all the leading actresses in Hollywood would be muscular instead of thin.

I guess I've done a 180 in my thinking since highschool. If I could re-write that paper, I might say that Margaret Atwood was right to be cynical...I am not sure that we have come very far in terms of gender roles over the past 20 years and given that I have two daughters, this worries me...
Posted by Healthy Life Lessons at 7:55 AM