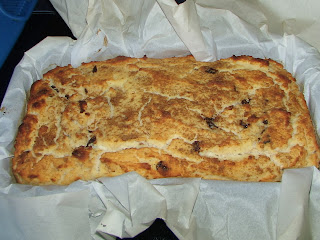 Among the foods I love the most, cinnamon definitely ranks up there.  It can transform the ordinary into extraordinary, if you ask me.  One of my favorite things to do is roast or simmer fresh fruit with cinnamon.  It ends up tasting like candy.  Even the girls have a weakness for apples, plums and peaches prepared this way.  Of course, cinnamon is also awesome in oatmeal, French toast and baked goods.

Cinnamon raisin bread is a favorite in this house.  Unfortunately, it is really darn hard to find a healthy version at the grocery store.  Most have refined flour in them and they all seem to be full of sugar.  So here is my version.  Not only is it sweet, moist and aromatic (the whole house smelled heavenly after I baked up this bread!), but it also happens to be gluten-free and sugar-free.  You can eat it plain, like you would a quick bread, or you can slather it (toasted or untoasted) with nut butter, jam, honey or your other favorite topping.  The protein and fibre in this bread will help keep you satisfied and avoiding any sugar crashes. too.

The girls went absolutely cuckoo over this bread and were already complaining about how I only made 1 loaf after their first bite.  They said it tasted like cake.  If you want a less sweet bread, use unflavoured protein powder.

Whisk together wet ingredients in a large bowl.  Add dry ingredients and stir until combined.  Let sit 5 minutes.   Scrape batter into a parchment paper-lined loaf pan.  Sprinkle top with additional cinnamon, if desired.  Bake at 375F for 40 minutes.  Cover top with foil if it begins to brown too quickly before the end of the baking time.  Let cool and remove from pan.  Keep in an airtight container for up to 5 days or freeze. 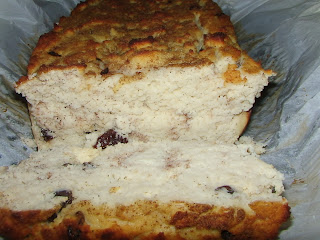 This recipe has been submitted to this week's Gluten-Free Friday.﻿