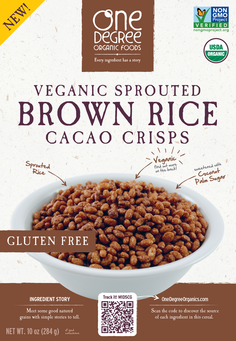 I know I bitch about breakfast cereal a lot, but I do think it is a very poor food choice.  High in carbs and sugar, and generally low in protein, even with milk, it doesn't sustain you for long.  Sugar high.  Sugar crash.  Extreme hunger for the rest of the day.  Overeat.  Wake up.  Repeat.

At least this is the story for many North Americans.

Unfortunately, the stuff is like crack.  I think Adam would divorce me rather than have to give up cereal.  But he knows its not a great choice, so he limits himself to eating it only on Sundays as his weekly treat.  The girls love cereal too, however, (especially Big A, who has a serious sweet tooth), and they would be happy to eat it anytime.  Of course, none of them go for whole grain, organic unsweetened cereals.  We certainly don't buy Fruit Loops or that kind of crap, but even their favorite cereal, Special K Protein, is nothing to write home about nutritionally.  Like look at the ingredients:

Sugar is the third ingredient, it uses soy protein isolate, the most processed and least healthy form of soy, BHT, which is a potential carcinogen, and the rice is most definitely refined white rice.  Gross!

I had pretty much given up on the idea of ever finding a breakfast cereal that I approve of, that they would eat until I discovered One Degree (A company whose organic grains and flours I've raved about before) now makes cereals.  At Fiesta Farms last week, I stuffed my cart with several types to try.

We've just opened one box so far, but Little A went cuckoo for the Cacao Crisps!  I think Big A will like the Honey Os because she is a honey nut. The ingredient lists are awesome.  Organic, whole grains, no toxic preservatives, and sweetened with coconut sugar!

Now, I still think there are better breakfast options, but if you must have cereal, check these out folks.
Posted by Healthy Life Lessons at 4:28 AM