Literally the day after I posted about the new and improved Little A, she went back to the old and not so improved preschooler we've been dealing with the past 18 months.  She has had her characteristic irrational and incredibly dramatic fits every evening this week.  The change coincided with her catching a bad cough and cold, however, so I'm hoping that it was a temporary blip.  By Saturday when she seemed fully recovered, she was back to her happy, delightful self.

Things with Big A have been unraveling too.  She has been giving me attitude for a while now, but Friday night she was being so obnoxious and disrespectful that I was flooded with the extreme negative feelings I used to get during our interactions on a regular basis.  I can't even remember the last time that happened.  Adam was out at a concert with his parents and while I was putting her to bed I felt like I was coming close to losing control.  I spoke through clenched teeth and may have said something I shouldn't have...something that starts with S and ends in T.  Things haven't escalated to this level between us in a while.

Friday started off badly too.  It was a PD day and Adam and I had our parent-teacher meeting with Big A's teacher at 9:45am.  So I let the girls stay home with me until the appointment and made them French toast.  But they were at each other's throats the entire time.  Little A had two lengthy screaming fits (the first one was over 30 minutes long...she was so hysterical she practically made herself sick...but then that's actually normal for her).  By the time I got them to daycare, I was almost late for the meeting, and I felt like I needed either a tranquilizer and/or some whisky straight up.

I think I'm a relatively competent, intelligent human being, so I don't understand why I struggle with parenting so much.  Lately when things go off the rails with the girls I often end up silent with my mouth agape trying to figure out how to control them with my mind completely blank.  On my to-do list is going back to my favorite books and reviewing strategies that have worked in the past.  I plan to review Siblings Without Rivalry here soon, and I'm hoping that writing the review will allow me to better digest the information, which will hopefully allow me to actually put it into practice.

There is some good news.  Saturday and Sunday were great.  The girls didn't fight too much, and everyone behaved relatively well. 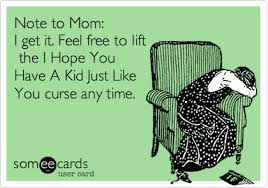 It's important to focus on the positives, right? So here's another: it may be Monday, but it's a beautiful day here in Toronto. The kind of autumn day we don't get too often. Enjoy!
Posted by Healthy Life Lessons at 5:03 AM