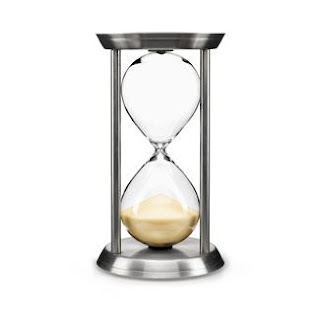 Like most kids, my girls are incredibly impatient.  If you know me well, then you are snickering right now, because you know that I am also extremely impatient.  I hate waiting in lines, I hate delays, I hate when people make me wait, and I have a low tolerance for pretty much anything I don't like.

So I try to remind myself - when my kids' impatience is making me nuts - that they come by it honestly, and that children really do seem to have a different experience of time than adults do.

When you are a kid, 15 minutes seems like an eternity, while as an adult, it can take that long simply to remember where you left your keys.  Hours, days, weeks, months, and even years just seem to fly by at a speed that didn't seem possible when you were a kid.

Recently I read a piece in a parenting magazine by a mom of almost grown kids, who advises new parents to try and enjoy their young children and not take the special moments in this stage of life for granted.  While I do see wisdom in her counsel, I think this is much easier said than done.  Honestly, sometimes it just really isn't possible to enjoy the present.

I look back at my first year with Little A and I do not for one second regret my misery and see this period through rose-coloured glasses.  It was awful. I was miserable.  When I think about it, I can only be grateful that I survived it and life is much better now.  I did not enjoy the baby stage with Little A at all and frankly I don't think I should have to apologize for it.  I enjoyed it much more with Big A, but still, I think there is much more to enjoy about having children who can walk and talk.

Of course, as I have said many times, the toddler and preschool years with Big A were no picnic.  Between the ages of 18 months and 5 years, she was an incredibly challenging, defiant and difficult child with Adam and I.  And now, Little A at 3 can be an absolute nightmare.

But despite the ongoing challenges of parenting, I now feel like there are pleasures and special moments of the present that I need to appreciate and cherish.  I recognize that these are likely fleeting and are things that I will miss.

Things like Big A's complete unself-consciousness and confidence.  I have never, ever heard her say a disparaging thing about her appearance, or anyone elses for that matter.  She loves dresses, jewellery, nail polish and funky hair dos, but not to impress anyone else, just for herself.  I love that although she is taller and heavier than most of her friends, neither her size nor anyone elses is important to her.  I love that she is completely unaware that there is any connection between what a person eats and how they look.  She is proud to tell anyone who will listen how much she weighs.

I am told that as she gets older, this will all likely change.  The day she criticizes herself or her appearance will be a very sad day for me.

Even though I am very happy to be done with babies, I will miss the sweet remnants of the baby stage I still see in Little A.  Her giggle, her baby-fine hair, the funny way she prounces certain words, such as 'cookie' like 'kooky' and 'berry' instead of 'very'.  I remind myself to appreciate this frequently as she gets very angry and upset with Adam and I when she is trying to tell us something and we just don't understand what she is trying to say.  She is still little enough to pick up and cuddle and hold on our laps, and she positively makes my heart melt when she throws her little arms around my neck and says, "Mommy I love you berry much!"  I love when she announces to everyone we see on the street that she has sparkley Dora underwear on (over her pull-up), but they gets very upset when strangers ignore her.  "Why aren't they listening to my words, mommy?" she asks.

But in the heat of the moment, appreciation and gratitude can still be challenging.  Overall we had a great long weekend, however, yesterday morning was miserable.  Little A woke up at 6:15am in a rotten mood.  Just pouring a glass of milk for her when she didn't ask for one, was enough for her to start shrieking and, I feared she was going to wake up not only Big A, but the entire neighbourhood.   When Big A woke up at 7am the girls almost instantly began fighting over everything.  I struggled to entertain them and keep them from tearing each others' hair out until Adam returned from the gym just before 9am.  A brief jaunt to a local park let them burn off some steam, but when we got in the car to head out to Ribfest, Little A had a fit over a wipe* that left her screaming for almost the entire 30 minute trip.  By the time we arrived I felt like I had been run over by a train and it was not even noon.

But then it all changed.  We sat down for lunch, the girls got face paints and balloon animals and we took them on the carnival rides.  They devoured ice cream cones that melted in the heat faster than they could lick them.  When we got home, Big A wanted more action, so Adam took her swimming, but Little A and I were beat (being out the heat friggin' kills me!) so we stayed home.  Suddenly she decided she wanted to take her pull-up off and wear ONLY underwear.  She informed me several minutes later she needed to pee and we made it to the toilet on time.  A little while later, she informed me she had to poo (we've been struggling most with getting her to poop in the toilet).  I whisked her to the bathroom and we had success.  She was so pleased with herself, she insisted we call all her grandparents to tell them the good news. She was so thrilled, she kept saying, "I can do it, I can do it."
For the rest of the day she was in a spectacular mood: playful, joyful, affectionate and sweet.

I certainly won't sugar-coat the challenges of having a 3-year old, but I will try to cherish the special moments that also come with this stage.  It won't be long until instead of spending a hot summer holiday with their parents, the girls arer hating us and will be taking off to the mall with their friends to buy skirts that are too short and get piercings that we never find out about.   Until then, I will enjoy the small pleasures and milestones (not only did Little A poop in the toilet yesterday, she also decided to give up wearing socks for the summer!).

*Not that you're intrested, but in case you are, here are the details of this particular tantrum: Little A's hands were sticky from eating cherries so she asked for a wet wipe.  I gave it to her and she began screaming that it wasn't wet.  It was.  She screamed and screamed that it was not.  Big A suggested we douse it with water and Little A agreed.  Even after doing so, Little A claimed it was not wet.  After fruitless arguing, Adam, Big A and I simply gave up and let Little A scream.  This is a pretty typical tantrum for her.
Posted by Healthy Life Lessons at 8:38 AM