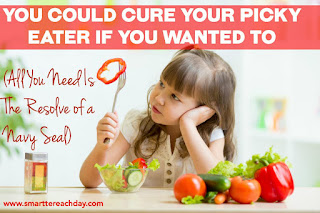 One of the first things I'd do if I won a lottery, is high someone to exclusively prepare the kids' meals. I'd cook my own, because I love cooking, but not for them.

They drive me effin crazy daily with their pickiness, and Big A, in particular, changes her mind dramatically about what she likes and doesn't like on a dime.

I try not to worry, but their diets suck. Little A avoids veggies at all costs.  And Big As is way too heavy on sugar and carbs. Its even worse now that she has an allowance and is old enough to walk to a store and buy stuff on her own.

I know I am not alone. Many parents struggle with this stuff and its tough.

One debate among parenting experts is whether or not its a good idea to hide veggies and fruit in other foods to get your kids to eat them. Some people think its better to try and serve them to your kids a hundred times until they decide they like them.

I don't really know why this has to be an EITHER/OR thing. Its never been the case in this house. I openly serve them veggies, but I also hide them in their food whenever I can. Why not? I don't see the harm. And don't give me crap about the ethics of tricking your kid. Even if it is unethical, I don't give a rats ass.

Anyways, one of my favorite ways to hide veggies is to buy frozen cauliflower and puree it. No green bits, and frozen has a much less pungent flavour and smell than fresh.  Recently, I discovered that adding frozen cauliflower into their smoothies is brilliant. They didn't have a freakin' clue! I am going to do this until the day they each leave the house (at that point I suspect they will adopt the student diet of Kraft dinner and beer).

Posted by Healthy Life Lessons at 5:05 AM