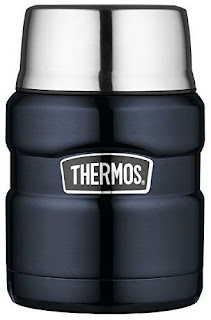 If I think back far enough, I remember having a lunch box as a kid, but what the actual food was wrapped in, I don't recall. By highschool, it wasn't cool to have a Charlie Brown lunchbox (or maybe it had Lucy on it), so I threw a sandwich in a plastic sandwich bag, and threw that in a brown paper lunch bag with an apple.

Nowadays,if you do that for your child, the Eco Police will be at your door in minutes and you will be marched away for the parent walk of shame.  Besides, a lot of schools (like ours) have waste-free lunch policies so you aren't allowed to bring anything that has to be thrown away.

Even Tupperware is frowned upon because of the toxins from reusable plastics. We've gone through a range of options with the girls but their favorites are always wide-mouth thermos containers, both because they keep food hot or cold, and because, they are perfect for dinner leftovers, which the girls prefer for lunch because it means they don't have to make a lunch themselves (yes, they're lazy!).

Big A lost hers a few months ago, and though we have one old one Adam and I used to use occasionally, they would fight over Little A's, so we were all delighted to receive Thermos brand Vacuum Insulated Food Jar with Spoon to try out.

The only problem was the girls both wanted it for themselves. I finally decided it would belong to no one and they would have to take turns using it.

Like other products made by Thermos, it is sturdy and doesn't leak. It definitely keeps the girls' hot lunches hot, which is important, because give them any tiny reason not to eat their lunch and they won't touch it! You parents understand.

The only criticism I have is that the spoon became a little loose over time, so sometimes it falls out. It is supposed to fit snugly in the lid. Also, it would have been more useful for it to be a fork or spork, because the girls don't usually take soup, they are far more likely to pack some sort of pasta as a hot lunch.

I like that it isn't too heavy, which minimizes complaints about backpacks weighing too much. Anything that cuts down on whining is great in my book!

So if you want a parenting award, check out Thermos's products, they have some cute ones just for kids too!

I don't know about you, but one of the best things about the weekends are not having to worry about school lunches!! Have a happy, healthy weekend.