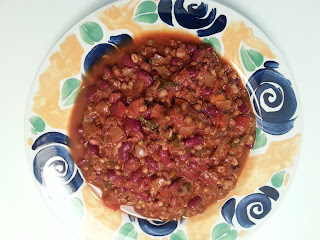 I know chili can be very controversial. Some people abhor beans in their chili. Some insist it must be spicy. Some like ground meat, some prefer chopped.

Personally, I think chili should be thick, and some styles I have seen are thin and soupy, and look like ground meat in broth more than anything else. Ick!

Nope, I like a good hearty chili, with either ground chicken or turkey, or vegan, but ALWAYS with beans, and a thick, rich sauce. That's exactly what this chili is and it is so good!

I made it when friends came over for dinner because the wife doesn't eat meat. It is also mild because she can't eat spicy food, but you can add as much heat as you wish. It is so incredibly easy to make, which is an added bonus.

I departed from tradition and did not do a mirepoix, skipping the celery and carrots, and instead just using sweet red and orange bell peppers and onion. I also used both sprouted bean mix and canned beans. The sprouted beans have a more toothsome consistency while the canned beans are more creamy. If you can't find sprouted bean mix, just add 2 more cans of beans of your choosing. There is also no broth in this chili, just diced canned tomatoes, passata (ground tomatoes) and water.

In a large pot, saute onion and peppers in oil. After a few minutes, add bean mix, vinegar, and spices. Once liquid cooks down, add everything except cilantro. After adding passata, fill passata jar with water and add that to the pot. Simmer for at least 30 minutes, or until ready to serve. Add cilantro right before serving. Keep leftovers refrigerated for up to 5 days or freeze.

I have shared this recipe with Vegetarian Mamma's Gluten-Free Friday.
Posted by Healthy Life Lessons at 4:43 AM