This year I did just 1 day of the conference and squashed it all in so I could work Saturday and Sunday have my usual Sunday.  I was there from 7:30am to 6pm and it was a long day!

I was so excited to see that Shaun T was coming this year, and Yoni Freedhoff, too, but unfortunately, neither of them were there on Friday.

I did see Jillian Michaels, who was speaking! 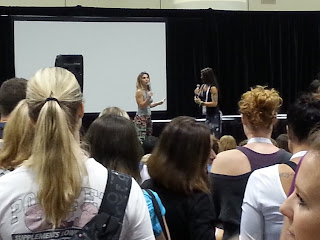 I hadn't been planning to hear her talk, but it was in the trade show, so for a few minutes I couldn't help myself.  In that time, I was surprisingly impressed with her.  A woman in the audience told her she'd lost a ton of weight and it was due to her inspiration and workouts, and she told Michaels that she'd changed her life. Michaels responded by telling her never to give anyone else so much power, that they'd never met before today, so the person solely responsible for changing her life was the woman herself. I like that! Most people would have just said something like, "Thank you, that's why I do what I do."  Wow, much more humble response than I would have anticipated!!

I did a completely useless spinning session where I learned nothing, and, even worse, was in the vicinity of a dude with bad BO. Blech!

I attended the key note presentation by Harley Pasternak. I have known of Pasternak for years because he got his MA from the Exercise Sciences Department at the University of Toronto, where I did my PhD.  He was often mentioned since he is an alumnus who is a celebrity.  If you haven't heard of him, he is a trainer of Hollywood celebs and has written a few books.

I wasn't expecting much as I find some of his ideas gimmicky and overly simplistic, but I actually liked his talk.  It wasn't created for the conference though, I discovered afterwards as you can read it in this People article. But I don't disagree with any of it when it comes down to suggestions for healthy living and weight loss.

I discovered a new protein bar and tried 2 flavours:

The Peanut Butter Perfection was meh, but the Delicious Cookie Dough was, indeed, absolutely delicious!

I did a session that was, what I think is quite possibly, the most fun session - and fitness class - EVER! I heard about Pound Fit last year, but hadn't signed up for it.  After seeing a demo in the tradeshow, I knew I had to try it. It was f*cking awesome! Its not the most intense workout, though you can adapt it to most fitness levels, but man, it was just amazing.  If it had been around 20 years ago, without a doubt I would have gotten certified to teach it.  Now, though its only a 1 day training program, its probably unlikely.


They also sell a DVD set, and I considered buying it at the tradeshow, but wasn't in the mood to drop $90, since I didn't really want a whole set anyways.  But seriously, this is a great workout for anyone who hates working out, unless you also hate loud music.

I treated myself to the newest Classical Stretch/Essentrics DVD set because they had a great tradeshow sale, and I snatched up the last copy they had!  I also listened to Miranda Esmond-White talk for a bit, but she wasn't saying anything she doesn't say in her videos.

I also attended a nutrition lecture by Gillian Mandich, which was on nutrition myths.  Though she didn't tell me anything I didn't already know, she did make me realize that if I was any kind of entrepreneur, I would myself have turned my knowledge into more money making opportunities.  She basically explained why the media misrepresents/misinterprets research findings and often misleads the public.  Geez, why didn't I start doing paid speaking engagements?  I guess it didn't help that in grad school I did everything possible to avoid public speaking...

I finished off the day with a great seminar on using foam rollers for pressure point release for recovery. I learned some new ways to release tight muscles using a roller in the back and chest (I usually only use it for lower body), as well as how to utilize it more effectively for the lower body.

Overall, it was pretty fun, which is a lot coming from me, since I hate large groups of mostly people I don't know.  Especially considering this year it was the biggest ever with 20,000 attendees!

Have a happy Monday and move as much as possible!


Posted by Healthy Life Lessons at 4:55 AM