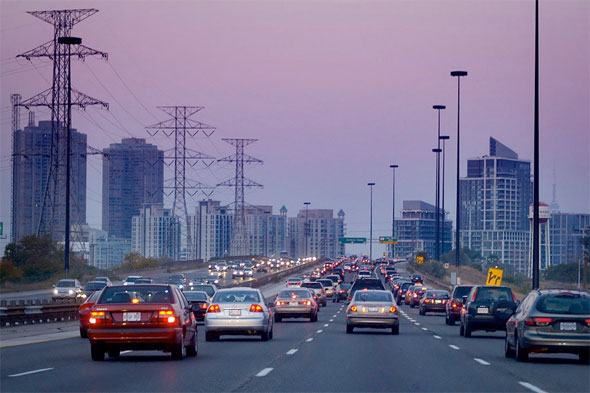 I know I promised to write a post about what makes Toronto such an awesome city...but unfortunately, first I have another bitch post.

The biggest issue here is transportation.  It sucks.  Compared to other cities our size and/or stature, we have a pathetic and outdated public transportation system.

Right now, living in or around the city is a pain because of the constant congestion on the roads and the subpar transit system...as well as the fact that drivers, cyclists and even some pedestrians lack patience, empathy and manners and are distracted (i.e. still using devices even though its illegal!!).

This was the blight on what would have otherwise been an amazing long weekend.

I had to work Friday night, but Saturday I booked off because we had tickets to take the girls, along with my in-laws to this play at the Shaw Festival in Niagara-on-the-Lake.  Its called Peter and the Starcatcher, and it was AWESOME!  Its written as the prequel to Peter Pan, and it was so clever and funny, we all loved it.  Niagara-on-the-Lake, of course, is an absolutely gorgeous little town and we had so much fun cruising up and down the main street.

What was not fun at all was the trip there and back.  From Toronto to St. Catharines, about 70 miles, it was bumper-to-bumper traffic.  What should have been a 1 hour and 40 minute trip was almost 3 hours.  On the way home, it was smooth sailing all the way to Toronto and we were so relieved because it was late, we were all tired and Big A had to pee.  Then we hit the Gardiner Expressway, which we discovered had no west end exits open because of the Caribana festival, so it was back to barely moving for so long I was ready to jump off the bridge. The first open exit was way east of our house, in the middle of the city, in the middle of city traffic, and we then had to back track west to get home.  Grrrr! Its so frustrating!!

Sunday was relatively quiet.  I taught spinning while Adam took the girls to Costco (yes, its a favorite family activity) and then he took them swimming while I caught up on all the laundry and housework we didn't do Saturday.  Yesterday, we spent the morning at the waterfront with my brother and his family and my parents, who were visiting, at the Boulevard Club.  In the afternoon, both girls had playdates.

I'll try to be positive and say that overall it was a lovely weekend, but man, getting anywhere is such a royal pain in the butt!!!  I really thought by now, we'd have invented those transporters they had on Star Trek so we could just say, "Beam me up Scotty!"

Posted by Healthy Life Lessons at 4:38 AM