The Circus Sucks and Other Things I Learned This Weekend

Okay, so as I always tell my clients, mistakes are learning experiences.  Really.  It's clichéd but true.  So what I learned this weekend is that circuses suck.  At least the one we attended did.  Big time.  The girls liked it okay, particularly Big A who was thrilled by the acrobats who performed.

So, the first sign that it might not have been a great idea was when I mentioned it to my mom.  I asked her if they'd ever taken me to a circus.  She couldn't remember, however, she COULD remember being horrified when her parents took her as a child because of the treatment of the animals.  Ugh!  Sometimes I can be naïve.  I just assume that these days animal mistreatment is so strictly prohibited that these types of large organizations could never get away with it.  All I had to do was think about the Marine Land scandal!  Sure enough, when we parked the car and walked over to the big tent, there were 3 women holding signs about boycotting circuses because of animal cruelty.  Oh man!

The next problem was that the big tent, pitched in what was essentially the parking lot of a suburban mall, had no fans or air conditioning.  Hello?  It's summer, like WTF???  Of course, it quickly became apparent why they don't bother trying to make it more comfortable.  As people began melting in the sweltering heat, they had numerous staff walking through the stands selling snow cones, soft drinks, $3 bottles of water, along with the usual popcorn and cotton candy.  It didn't take long for the girls to become really sweaty so Adam stood up and grabbed 2 cherry snow cones for them and 2 massive Diet Pepsis for us - not something I would ever normally drink, but at that moment I would have guzzled down elk urine if it was on ice.  As it turns out, I didn't really drink it anyways, instead, I scooped out the ice and rubbed it all over my body.  Yes, it was that hot!

The first few minutes were lame-o while they introduced a bunch of VIPs from the Shriners, who all gave little speeches.  No one listened and it was incredibly boring.  Then they had a tiger act that was okay...I paid close attention to make sure the whips never touched the animals.  Oy!

Fortunately, the rest of the acts, aside from horses galloping around the ring for a bit, were human, and they actually were quite entertaining.  But it was hard to see anything because of the sweat pouring down my face.  All the ice from my drink melted really fast.

The girls then decided they were starving.  So another $10 later, each girl was happily munching on a box of popcorn (at least the proceeds supposedly go towards a good cause).  Ninety minutes in there was an intermission.  Little A wanted to go home - exhausted as it was already 5:30pm, and although Big A wanted to stay, Adam and I decided it was a good idea to hit the road - we figured if we waiting until the end, we'd be fighting the crowds.  Oh man if felt good to get into the car and turn on the air!!

On the way home I tried to get a discussion going about the treatment of animals in circuses but Little a was too wiped out to do anything except sit in her car seat and Big A thought the animals enjoy performing.  Maybe I'm expecting critical thinking skills a bit more advanced than a typical 7-year-old's...

I learned a few other things on Saturday: With kids, simplicity is often best.  After all the crap the girls ate at the circus, I wanted to make them a nutritious dinner.  Scrambled egg and cheese wraps were on the menu but the only veggie in the fridge was a box of organic baby spinach.  Could I hide it in their wraps?  Would they eat creamed spinach?  Salad? Sautéed garlic spinach?  For each idea I came up with, all I could picture was Big A making faces and Little A shrieking with horror.  Finally, I decided to just bring the box to the table and ask them if they wanted to munch on some 'lettuce'.  "That's baby spinach mommy" Big A said, reading the box.  In the end, Little A was happy to just eat some straight out of the box, plain, while Big A dipped her spinach leaves in salad dressing.  Awesome!

One other thing I learned is that goat cheese is great in salads!

Actually, I learned this in December but confirmed it Saturday night.  When we were at Pearson airport on our way to Florida at Christmas, I was rushing to find something to bring on the plane for lunch.  One of the airport restaurants had a spinach salad with goat cheese, berries and almonds and it looked good so I grabbed it.  It was good.  Really good!  I think I was turned off goat cheese in the 1990s because it was so trendy, it was in everything.  I don't like it on pizza or in a sandwich, but I'm diggin' it in a salad.

This was my salad bowl on Saturday: 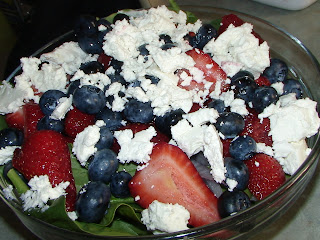 Adam had his salad with chicken instead of cheese, of course.

Probably would have been a healthier dinner if I hadn't also made us (baked) French fries, and if we hadn't polished off all of them.  Oh well, we really enjoyed our meal!

So there you have it, those are the healthy life lessons I learned this weekend.  How about you, what did you learn?


Posted by Healthy Life Lessons at 4:49 AM