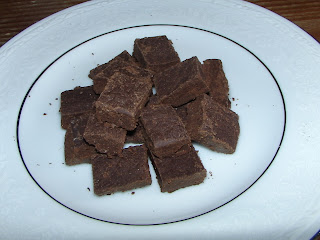 I've gotten myself used to dark chocolate, but I still do have a thing for the milk stuff.  When we were in New York and I nabbed a few bars of Coco Polo, it was the milk with almonds that had me swooning.  It's the creaminess of it I think.  By the way, Coco Polo is now being carried in Canada by Low Carb Canada!!  But cheap it is not.

I tried to make my own version by adding creamed coconut to Chocolate Covered Katie's 3 Ingredient Chocolate Bar recipe, but it had to be refrigerated to stay firm, so it never quite got to the consistency I wanted.  It also didn't really taste like milk chocolate.  So I decided to take another kick at the can using a different approach.

These are not just sugar-free and vegan, they are DEVINE!  I cut them into chunks to use in baking, but you can cut it into bars for eating too.  I am so making this recipe again!!

FYI - I didn't bother to temper it, so it isn't shiny and smooth like it would be if you did.  Personally, I don't care about that, as long as it tastes good.

Melt chocolate over a double boiler (or heat safe bowl set over simmering water).  Meanwhile, pour milk into a saucepan over medium heat.  Add sweeteners and vanilla.  Heat for about 10 minutes, stirring frequently (doesn't have to come to a full boil).  Remove chocolate from heat and stir in milk mixture.  Quickly (it starts to harden quickly!!) pour onto a parchment-lined baking sheet and spread out to desired thinness.  Refrigerate until firm and cut into desired shapes and sizes.