Adam gets back tonight (insert big sigh here!).  The girls are still in one piece and I'm still standing, although I've developed an eye twitch, possibly lost some weight and gained a few more wrinkles in my forehead.

I'm still certain that if I was a single mother, my children would be filthy, toothless, illiterate, delinquents. Ha ha!  I only missed one bath and a few days of flossing, but I forgot about brushing the girls hair after bathing them most nights.  Big A had quiet the rats-nest going by last Saturday.  Yeah, I know, I'm mother of the year!  Fortunately, after spending the night with my in-laws, the girls were delivered to me the next day with glossy manes.  Getting Big A to read every day was as difficult as I thought it would be, but I managed to push her through it for at least a few minutes most days.

I'm trying to accept that Little A is going through a difficult period, much like Big A did between the ages of 18 months and 5 years, and it just has to ride it's course.  Nothing I do seems to help.  I don't  think it's any coincidence that Little A's phase began at age 2, right when she gave up her nap.  She is clearly chronically tired, but stubbornly refuses to even take so much as some quiet time.

For the most part, Big A has been pretty good while Adam's been gone, but I would say both she and I having been starting to come apart over the past week.  She's been copping more and more of an attitude and trying to press my buttons.  Yesterday morning, for example, she demanded I make her breakfast.  I told her I she could wait until I got dressed, or make herself something in the meantime (note that some mornings, she INSISTS on making her own breakfast.  She burst into tears and shouted at me, "Fine, but the only things I know how to make are really sugary, so it will be like I'm eating a donut for breakfast!"  Yeah, she knows how to piss me off, doesn't she?

At least I've been feeling great lately thanks to my new Self-Help Kit!

After I decided to nix the extremely expensive procedures with potential side effects and no guarantee of success to treat my tendonitis, I decided to try some more affordable options. 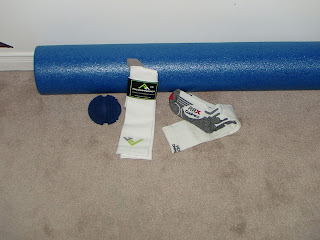 ...long story on why I have 2 kinds of compressions socks...it was kind of an accident, but now it's part of my plan...

I am actually very surprised how helpful it's been so far.  The problem for me has been that while I need to stretch regularly to avoid flare-ups, really deep stretching can be risky (as that's how I reinjured my left hamstring some months ago), and often regular stretching just doesn't seem to be getting the tightness out.  Up until now, I've been occasionally using the foam roller at the JCC on Sundays when I'm there to teach spin, but once a week isn't enough.  Fortunately, just a few minutes a day is!  It's honestly done wonders, particularly for my calves and hamstrings.  The acuball is great for the bottom of my feet and for my back.  The socks are awesome for both prevention and recovery.  I wear the Pro Compression socks during cardio workouts, and the Running Room ones, which aren't quite as 'compressive' afterwards.

It's amazing how such simple things can have such a huge impact.  If you are not familiar with foam rollers and what they can do, you might want to acquant yourself with them.  They are great for both promoting flexibility and myofascial release, as well as for strength building exercises.

Check out this article if you want some ideas on how  to use one.

Posted by Healthy Life Lessons at 6:07 AM