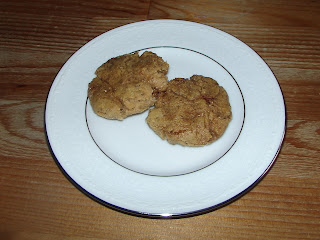 Friday (snow day here in Toronto), I drove the girls to school/daycare and then drove a few hours later to volunteer at the school and then pick up some stuff at the market.  By that point, the snow was so deep, I barely got the car back in the garage.  At that point I knew I was walking to get the girls later on, which I knew was going to be tricky.  I suspected the stroller would be impossible, so it meant Little A was going to have to walk, which is not easy for someone so little.  I brought their snow shoes with me and hoped for the best.  To my surprise, they were total troopers and snowshoed enthusiastically the whole way home without any complaints.

In any case, once I knew we were going to be on foot, I also knew we'd need a reward for trudging through all that snow.  So the girls munched on these while they warmed up and watched cartoons while I shovelled for the 3rd time.  As soon as I was done, our neighbour got out his snowblower.  Sigh!  My mother also miraculously made it in from New York, so I wanted a nice dessert to serve after dinner.  What better reward then soft, spicy, sweet cookies?

Place all wet ingredients in food processor and process until smooth.  Add dry ingredients and pulse until dough comes together.  Roll into balls and then flatten slightly onto baking sheet that has been lined with parchment paper.  Bake at 350F for about 12 minutes, or until golden.  Leave on baking sheet and while still warm, top with cinnamon glaze (recipe below).  Makes 22 cookies.

Whisk together ingredients for glaze and pour over cookies, allow to cool and set.

This recipe has been entered into Vegetarian Mamma's Gluten-Free Friday for this Valentine's Week of February!
Posted by Healthy Life Lessons at 4:34 AM