The Truth About Cats and Dogs

If you ask me, there are 4 types of people in the world:
1. Cat lovers;
2. Dog lovers;
3. Cat and dog lovers (these folks generally like most animals), and
4. Folks who don't like cats or dogs (these people usually don't like any animals all that much).

I have ALWAYS been part of the cat lover camp and this seems to be a trait that I was born with.

Neither of my parents grew up with cats and we did not have cats when I was very young. Nevertheless, by 18 months of age, I showed an unusual affinity for cats.

I was very attached to my stuffed cat, "Chiggy". Little did I know that over the years I had 3 Chiggies because my over-zealous love for this object destroyed these toys rather quickly. Unfortunately, when the third Chiggy lost its' head when I was 3 years old when I wacked my taunting brother with her, my grandmother - who had purchased all 3 - discovered that the manufacturing company was no longer making this doll. I was stuck with a decapitated kitty that my mom was unable to resuscitate with a needle and thread. Eventually, Chiggy looked like she had stepped on a landmine because it took a heavy dose of duct tape to keep her together and as time went on, she developed "wounds" all over her body.

But I did not care. Chiggy was still the love of my life and I took her with me everywhere and slept with her every night until I was about 6 or 7.

Even though I had Chiggy as my loyal companion, I wanted a real cat. I must have begged my parents for a cat almost every day for the first 10 years of my life. Unfortunately, my older brother suffered from a host of serious allergies including cats and dogs and asthma. So we were stuck with goldfish and hamsters as pets. Although I generally liked all animals, these were poor substitutes for the pet of my dreams.

Then when I turned 11, my dream came true. My parents agreed to let us get some kittens. My brother had outgrown most of his allergies by then and my mom's colleague, who lived on a farm and had a cat that had just had a litter, offered us a perfect deal: we could take 2 kittens home for a few weeks, and if my brother showed any signs of an allergic reaction, she would take them back. Of course, I knew immediately that would never happen, fate could never be so cruel!

And I was right!

I will never forget the day I first laid eyes on the first real feline love of my life. The litter included 3 grey tabbies, a marmalade cat (who had already been spoken for) and a calico. We walked into the farm house and I quickly spied the calico sleeping on a pillow. I immediately went into a trance and started pointing and repeating, "THAT ONE IS MINE". And so it was.

My mom's colleague had named each of them after a rock and roll song. The calico was Maggie Mae and the tabby my brother chose was Ziggy Stardust. But because Maggie Mae had 3 extra toes on her front paws, it looked like she was wearing enormous, white furry mittens. So I renamed her "Miss Maggie Mae Mittens" but she quickly became known as just "Mittens" or "Mitty".

Every waking minute I was home, I spent smothering Mittens with hugs and kisses. Sometimes this was welcomed, but other times she hid from me to get some rest from the constant attention.

Nevertheless, all this affection paid off. Mittens grew into an incredibly affectionate animal. She loved to snuggle and had a funny habit of licking people's eyes with her rough tongue. She also loved to lie on my dad every night while he watched the late news and gaze lovingly into his eyes. We speculated that she had fallen in love with his fuzzy (bearded) face.

Ziggy was very affectionate too, however, he preferred to sit at the bottom of my mom's bed each night while she read.

Both Mittens and Ziggy were very responsive animals with distinctive personalities and funny qwerks. They both LOVED people food. Some favorites were not surprising (meat, fish, etc.) while others were simply bizarre. Ziggy favoured green leafy veggies and, in particular, the leaves from broccoli. If you dared to leave a salad out, half of it would be gone before you knew it! He also loved Haagen Daz vanilla almond fudge, hummus, and matzo. Mittens loved all bread and sweets. These items had to be well hidden or they were quickly devoured. I once left a batch of muffins cooling on the counter and when I returned to the kitchen, the top of every one had at least one bite out of it. Mittens also loved anything with a tomato sauce, such as pasta or baked beans. Both cats adored Stoned Wheat Thin crackers, and could identify the particular sound of that package being opened.

When I left for university, I reluctantly left Mittens living with my parents. But my devotion to her and Ziggy remained strong, so much so, that more than one boyfriend over the years accused me of caring more for the cats than I did for them. I did.

It was a very sad day when she was 16 years old that my mom called to tell me that Mittens had been put to sleep because of chronic illness. I was heartbroken. She was such a loving animal that she had become a favorite at the vet's office and my mom told me that even some of the staff cried. Ziggy had to be put down shortly thereafter.

A few years later in 1998, I decided it was time for me to get more cats. I purchased a pure-bred Siamese kitten (Lester) from a breeder, and a Russian Blue (Milo) from a cat rescue. These tiny animals were beautiful and I instantly fell in love all over again, particularly with Lester, who quickly became my new baby. My love for them was so strong, that when Adam showed up to pick me up for our first date, the self-professed animal hater with a severe allergy, claimed to "like" cats because he instantly sensed my devotion to them. On our second date, he tried to tell me that the sudden onset of congestion, sneezing and wheezing he developed was a cold. On our third date, he reluctantly admitted the truth. But he tolerated the cats for years, even after he moved in with me.

Unfortunately everything changed about a month before Big A was born. Adam's allergist told him that living (and sleeping) with cats was damaging his health. He warned him that he may not be able to live with them much longer and most certainly had to get them out of our bed at night. Although I was devastated, things were going south in other ways too. When we moved into our house, Lester did not adjust to the change. Both cats - particularly Lester - objected to being banned from our bedroom at night. They sat at our bedroom door meowing incessantly and scratching at the carpet. We weren't getting any sleep. When Big A arrived things got worse. They weren't used to having to share my attention. Lester's fur began to lose its lustre and started falling out in clumps. He became extremely skinny and sick looking. He was clearly depressed.

None of the suggestions our vet gave us helped. It was clear, both for Adam's sake, and for the cats, they had to go.

But finding a good home for grown cats is tough. The Humane Society would not take them. The one cat shelter I found was disgusting and was raided and shut down less than 2 weeks after we visited. I emailed everyone I knew, but there were few hopeful solutions.

Then a miracle happened. Hours after posting a plea on the Chatelaine magazine pets forum, a woman - K - contacted me. She had been looking for a Russian Blue, and was happy to take both cats. She had 3 daughters, one with autism, who benefits from being around animals and having grown cats was more appropriate for this purpose. She was willing to drive 3 hours from their home to Toronto to pick them up. I instantly knew in my heart that this was the perfect solution.

K and her husband turned out to be "salt-of-the-earth" folks and we loved them and trusted them right away. I became Facebook friends with K and she frequently posted pics of the cats with her girls. I could tell from the photos that they were happy - snuggling with the kids and prancing around their house and garden. Lester's fur became radiant and he filled out again. K provided me with periodic updates on their daily antics.

So it was somewhat surprising for me when she sent me a note yesterday to let me know that Lester had been put to sleep. He had developed kidney failure and was clearly suffering. It felt like a punch in the gut.

To be honest, I don't think about cats much anymore, and have no desire to have any pets. It isn't possible because of Adam's allergies, but I also feel no need for the added responsibility.

Interestingly, Big A has followed in Adam's foot steps and exhibits more fear than affection for animals, but Little A is already smitten with all living creatures...particularly with kitty cats! Although I realize that her heart may be broken one day when she discovers that until she leaves our home she will never have one of her own, it warms my heart to see her shrieking with delight as she pets the soft fur of one of the neighbourhood cats. 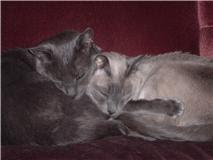 Posted by Healthy Life Lessons at 7:47 AM