Game On: Board Game Reviews

I have always adored board games. As a kid I played Monopoly, Trivial Pursuit, Clue and Scrabble regularly with my family.

As I got older I became hooked on games like Pictionary, Scattergories, Taboo, Cranium, etc. In fact, as often as possible I would invite friends over for game nights and Adam and I once hosted a board game New Year's Eve party (long before kids!).

The girls love them too and we've amassed a good collection. Unfortunately, I work a lot on weekends, so its usually Adam and the girls who play them. We always prefer getting the girls playing a board game instead of doing anything on a device! Board games are a great way to hang out as a family.

Recently we were sent 2 new ones to try out, and that's just what Adam and the kids did over March break.

The first, Rubik's Race, was new to Adam and I but the girls had played it before and already were fans. 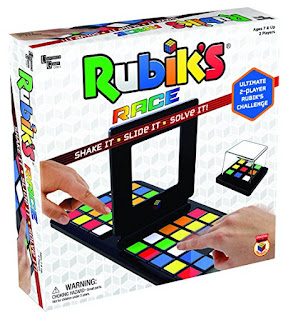 Essentially, you shake the Scrambler to create a Rubik's pattern and then slide the tiles to match the pattern on your board to the pattern in the Scrambler. The first player to complete the match and slam down the center frame wins!

Its a simple concept and easy to set up and Adam and the girls really enjoy playing it together.

The other, Bob Ross: The Art of Chill, was new to us all. This one, unfortunately, bombed. Now we knew it was a gamble to play as a family because it is recommended for people over age 12, but ironically, it was Adam who got frustrated with it first and threw in the towel, feeling it is much too complicated and not at all enjoyable. 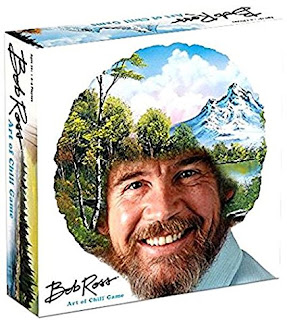 Since it was so complicated they couldn't even figure it out completely, I found a link that describes the game accordingly:

For The Art of Chill, each player starts with three art supplies cards, with each card showing one of seven paints and one of four tools. You take one of the large double-sided painting cards, place it on the easel, and place Bob on the first space on the painting track.

Each player takes a turn to roll the die and either draws an art supplies card, plays a paint to their palette, receives an extra action for the turn, or both draws a "Chill" card and advances Bob on the painting track.

The player then takes three actions. Actions include drawing an art supplies cards, discarding two matching cards to claim the matching technique card (which is worth 2 points and 1 bonus point when used), sweep the art supplies card row, place a paint on their palette, wash half their palette, or complete a section of a painting. To take this latter action, the player needs to have all of the paint needed for one of the painting's three sections on their palette with no unneeded colors mixed in! The player scores points equal to the number of paints used, bonus points if they're the first or second to paint this, and additional points if they've painted this feature before Bob (i.e., did you paint this before the Bob figure reaches this space on the painting track.

When someone has completed all three features on a painting or Bob has reached the end of the painting track, this work is complete! Remove it from the easel, and start a new painting. Players continue to take turns until someone reaches a maximum chill of 30 points, at which point they win the game instantly.

So, do I recommend these games? Well, Rubik's Race I recommend for sure, especially for kids. The Art of Chill might appeal to people who have a lot of patience, but it was not a good fit for our family. Nevertheless, board games are a great way to spend time with your kids, especially when relegated indoors due to weather conditions. There are also games out there that will appeal to people of all ages. Personally, I have always favored word games. Get your Scrabble on!

Disclosure: We were sent these games to review but all the opinions on this blog are our own.
Posted by Healthy Life Lessons at 6:26 AM