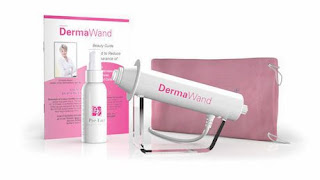 I despise the fact that once women look over 35, they are no longer considered beautiful. Okay, sure, there are exceptions for the genetically gifted, such as Christie Brinkley, but for the rest of us, normal aging is just not acceptable.

The expectations for women to 'age gracefully' are ridiculous, especially considering the double standards we have for men. Men can be fat, balding, bags of wrinkles and no one says boo. Health-wise, women tend to age better since men generally do such a poor job of looking after themselves.

Given the ridiculousness of all this, I hate that I let this pressure affect how I feel about my own appearance. I have never felt physically better or fitter. I think its the wisdom that comes along with aging that has helped me learn what works best in terms of diet and exercise for feeling my best, unfortunately, I believe my outside doesn't match the way I feel on the inside. I feel  like I am 25, but I definitely look my age thanks to lines on my face.

I know many women, some younger than I am, who have done Botox, and believe me, it is very tempting! But I have resisted for a few reasons. One, the cost. If it was a one and done thing, maybe, but the effects only last a few months, so you have to keep it up, and that adds up real fast! Two, it kind of scares the crap out of me. The potential negative side effects are a bit creepy.

I've tried all sorts of creams and serums promising wrinkle reducing miracles but never seen much difference no matter how much they cost.

So when DermaWand offered me an opportunity to try out their product, something non-invasive, I figured, why the heck not?

The DermaWand uses radio technology to reduce wrinkles and fine lines. The supposed benefits are:

ENRICHED OXYGEN
DermaWand® gives off enriched oxygen which bathes your skin while you're using it. You'll recognize the smell; it's that fresh, clean "after a rainstorm" fragrance. Enriched oxygen will help breathe new life into your skin’s surface and with DermaWand®, you will see a reduction in pore size.

So I have been using it on my "Number 11" (my friend's term for the 2 vertical lines we get between the eye brows) because I had them the most, since January 2018 (with a 3 week break while we were in Israel and during my 2 weeks of flu). At first I was using it twice a day, up until our trip, but afterwards, and after recovering from the flu, my motivation to make it happen twice daily waned, so since then I have being doing it once  daily. In case you're wondering, no, it does not hurt at all. You just massage the area using the motion directed in the instruction booklet (it depends which area you are focusing on). You apply a moisturizer first, though they sent me the gel the company makes to use with it so that's what I have been using.

Has it worked? I think so. 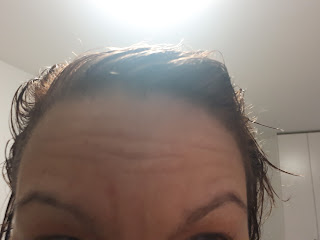 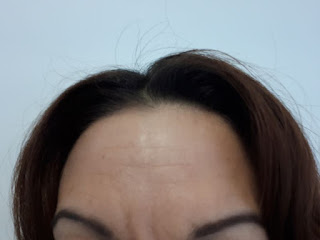 I think my 11s are not quite as deep now, though they are still there. But hey, I will take any degree of improvement!

So do I plan to keep using it? Hell yes! Maybe my wrinkles and lines will continue to diminish so that if I am consistent, by the time I'm 80, I will look 30!

Disclosure: I was sent this product to review, but all opinions on this blog are my own.

Posted by Healthy Life Lessons at 4:53 AM