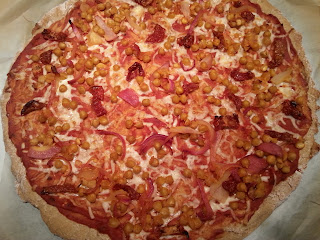 Wow, its been a while since I have posted a recipe! But now that our new kitchen is done, I'm back!

I decided to break in the new kitchen with a new from-scratch pizza crust. What's different about this one, is it's yeast-based, something I haven't made in ages. Truthfully, there are lots of whole grain pizza doughs available around Toronto, so normally I wouldn't bother, but I have to say, it was much easier than I expected. I think I will have to do this more often!

What makes this recipe a little different is that it uses aquafaba (chickpea liquid) as the binding agent, and is oil-free and vegan.

Why, when I am not vegan, or even vegetarian, do I make so many plant-based recipes? Well, first, plant-based foods are super healthy and I subscribe to Michael Pollan's philosophy: Eat food. Not too much. Mostly plants. Second, it brings out my inner scientist. I love experimenting with recipes and seeing how non-traditional ingredients (that are healthier) can sub for the more conventional ones. Like, it blows my mind that you can create baked goods that can pass as containing flour, but are actually made from beans or plantains! And aquafaba is amazing. The liquid from canned chickpeas can be a substitute for eggs! How cool is that?

Anyways, the crust turned out great, however, I wasn't wild about the toppings I made for this particular pizza. I tossed the chickpeas I had from the can I used to get the aquafaba, with red onion, and garlic and sauteed it all with some buffalo sauce, and threw on some sundried tomatoes. Unfortunately, I didn't love chickpeas on pizza. I think next time I will go with my favorite, more traditional toppings of spinach, kalamata olives and sundried tomatoes.

This recipe makes a lot of dough. You can halve it, but I say, if you are going to the trouble of making the dough from scratch, make lots! You can always freeze half for later use. I used it all to make 2 extra large pizzas, but I think next time I would make the crust thinner, and maybe make 3 slightly smaller pizzas.

No matter what though, its pizza right? Is there such a thing as bad pizza?

Mix together dry ingredients in a very large bowl and then add hot water and aquafaba. If dough is too dry, add more hot water, a little at a time, until dough can be formed into a ball. Cover bowl with plastic wrap and leave in a warm place to double in size, about 40 minutes.

Lay parchment paper over baking sheet and take desired amount of dough (depending on size and thickness of crust you want), and flour the top surface. Use hands to press out dough into desired shape. Use fork to poke bottom of crust and then bake at 450F for 5-8 minutes.  Top with desired ingredients and return to oven and bake for about 10-12 minutes. Enjoy!

Leftovers can be refrigerated for up to 4 days or frozen.

Though its Friday, I am kinda dreading this weekend. Up until this point in our renos, we had a member of the crew putting together all our new furniture, but they basically finished up this week, so all the smaller items that have been delivered in the past few days, we are going to attempt to assemble ourselves. I predict a lot of blood, sweat and tears. And swearing. Worst case scenario, we'll have to ask them to come back and help. Neither Adam nor I have much patience for this stuff. Frankly, I despise the fact that every single item of furniture these days has to be put together by the consumer. Grr!

Anyways, have a happy, healthy weekend and make pizza!

I have shared this recipe with Urban Naturale's Plant-based Pot Luck Party.
Posted by Healthy Life Lessons at 4:52 AM