What I'm Loving This Spring

I don't feel so chipper this Monday morning because the weather has been too F-ing HOT! This heat and humidity in May is not cool (no pun intended).  Fortunately, they are predicting somewhat cooler temps for this week.

Anyways, on to things that do make me happy.  Here are a few of my favorite things as of late.

The first is my Veggetti: 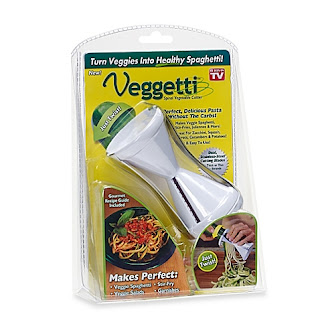 Its now the 3rd...no 4th spiralizer I've bought.  The first I got on Groupon for like $10 and its not great. The second was a supposedly good one, one of the big kinds with several blades, from Loblaws and it did well for a bit but eventually my monstrously strong hands broke off all the handles. The next one was about the same price but a different design that I found on Amazon.  It turned out to be great for juicing and grating but not for spiralizing.  It doesn't secure the veggie and when you turn the crank, it just flies across the room. Fabulous.

Finally, I decided, on a whim, to buy the Veggetti.  Its small, designed only for spiralizing, and though its entirely done by hand, the advantage is there are no handles that can break off. I got it on sale for $20.  So far I'm loving it.  Zucchini noodles with turkey meat sauce? Yummers!!

I am also loving Moroccan Oil brand argan oil. Moroccan oil is especially essential for me in warmer weather when my very curly hair can easily get way out of control! I went to Trade Secrets to get my usual brand, which works just as well as Moroccan Oil brand (Dermorganic):

But they told me it was no longer being manufactured. I was so bummed that they managed to talk me into the Moroccan Oil, which is ridiculously expensive, like close to $50/bottle! After leaving the store, I went to Marshall's and ended up finding my beloved Dermorganic for $16/bottle! WTF Trade Secrets?? I went back to return it and they said they only do exchanges but I couldn't find a single thing I wanted so I just kept it.  As it turns out, I love it, not because it works any better than Dermorganic, but because it smells heavenly! When I use it I've even gotten compliments on my 'perfume'!! Of course, I know a lot of people avoid scented products, but I adore them. That being said, I won't be buying it again because its too damn expensive and my Dermorganic works as well, and now I know I can get it at Marshalls for $16.

I also discovered Stash Iced Tea powder, which is awesome!! 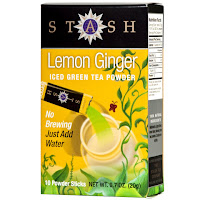 When I am on the go I have been adding the lemon ginger to my water bottle, along with a few teaspoons of cider vinegar. Its delish!! There are other flavours, including organic varieties too. Its great for folks who don't like drinking plain water and its so convenient because you can take the little packets with you.

There you are, now go have a good Monday.

Posted by Healthy Life Lessons at 4:51 AM