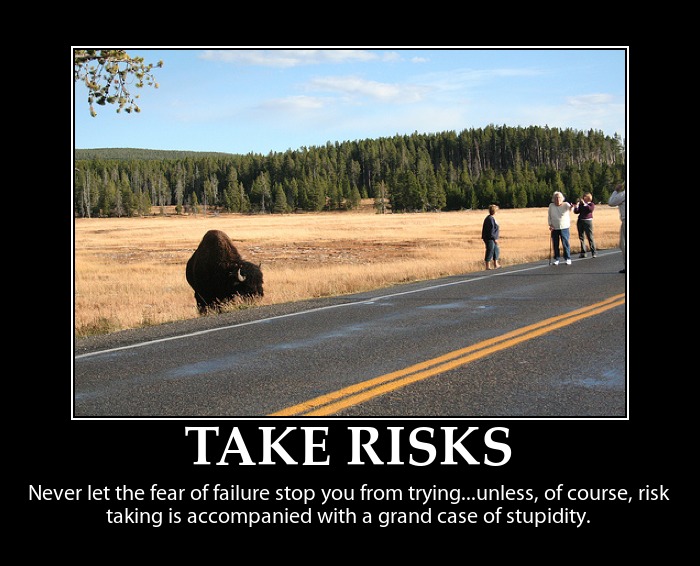 You have nothing to fear but fear itself ~ Franklin D. Roosevelt

Yeah, so I will admit that I am not much of a risk taker.  Of the physical kind, anyways.  While I am happy to test my limits in the gym any day (I'm still feeling those deadlifts I did Sunday in my butt!), I am rather averse to most dangerous activities.  Even as a kid, risk wasn't for me.  After years of gymnastics and trampoline, I quit both when I was told I'd have to take it to the next level in terms of what I was willing to do. To be honest I could never do much more in gymnastics than walk on my hands, but I did get to the point of doing twists and front and back flips in trampoline.  But doing double flips? Nope, I was out of there. And I only down hill skied once, and that was one time too many.

While I am generally not at all an overprotective parent, I do get super nervous about the girls' physical safety.  Just last week I was battling in the playground with Little A because she wanted to do some trick involving sitting on a really high bar and letting go with both hands before flinging herself to the ground.  It didn't make me feel any better that she told me, "Daddy lets me do it!" No surprise though as Adam is far more relaxed about these things.

I love doing family bike rides, but I'm pretty much anxious the whole time.  Big A is pretty cautious but Little A just has no sense of danger.

Well I was pushed way beyond my comfort zone on Monday, Victoria Day, rather accidently, but I am happy to say it turned out great.  Both because none of us got hurt and because it proved that as a family, we're pretty resilient.

We made plans to go to the Evergreen Brickworks with friends.  I suggested we take public transport because I knew it would be a zoo and parking might be hard to find.  But Adam wanted us to try biking there.  It is 'supposed' to be bike-able by taking the Beltline Trail and I've always wanted to bike there, but I didn't think the girls were old enough...Little A is pretty little!  Somehow Adam convinced me as did Google Map directions which told us we could take relatively quiet city streets all the way to the Beltline, and then the trail all the way to the Brickworks. Well, while this may be theoretically true, Google Maps sucks rocks.  It took us to nowhere and we ended up having to ask some dude who told us an alternate route thanks to the GPS on his phone (I forgot my phone at home and Adam's doesn't have a SIM card - I've said it before, we aren't phone people!).

We eventually found our way there with only about the last 15 minutes of the trip being on any sort of trail.  We figured if we followed the trail on our way home we'd have a much easier trip back.

After meeting up with our friends, gorging on food truck treats and craft beer and letting the kids run wild, we decided to head home.

We had a very enjoyable 15 minute ride until we entered the part of the trail we had not been on on the trip there.  Big mistake! This was not the Beltline, this was deep into the Toronto ravine system!  This gives you an idea of (the flattest, most benign) of what we found ourselves in:

There was a path but I definitely would not call it a trail...and certainly not a bike trail! We ended up in what seemed like an endless hike on steep, rocky, hilly, muddy, slippery and unstable terrain with no idea how to get out.  If you had told me that morning we'd end up there with the girls and all our bikes I would have FREAKED! But I will say that in the moment of crisis (or what feels like a crisis), I am good at pulling it together.  For most of it I walked/carried my bike in the lead, warning everyone when there were areas that were particularly precarious, Big A was behind me walking her bike, and sometimes getting me to lift it over bad areas or big fallen tree trunks, Little A walked behind her, scampering over the rocks and trees, and Adam took up the lead walking/carrying his bike and Little A's.  Thank goodness he's so strong!!
Admittedly, at one point, I was getting discouraged because there seemed to be no end or way out and the path was getting steeper, narrower and muddier (i.e. more dangerous!), but just then we found the exit at Mount Pleasant Cemetery, which meant we finally knew exactly where we were.  Whew!
Riding the last few kilometres on the city streets felt like a cake walk.  The girls were total troopers and except for needing to stop for a water and Cliff Bar break, they just kept going.  We arrived home sweaty, tired and filthy.  After we all showered, the girls started inhaling food like it was going out of style, they had clearly worked up quite the appetite!
So while I wouldn't have willingly gone on this little adventure, I have to say it was great in that we all felt quite the sense of accomplishment at the end and, of course, that's a great experience for the girls to have.  Hopefully it makes up for all my overprotectiveness in the playground!
Happy Hump Day, and here's to taking risks!
﻿ Posted by Healthy Life Lessons at 4:36 AM