I know I have an unusual affection for vegetables that not everyone shares. I guess it isn't necessarily "normal" to get giddy over kale or to inhale a whole bunch of broccoli in one sitting. But hey, I never claimed to be normal! 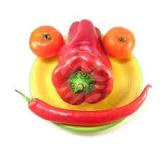 I always tease Adam because, although he eats everything I cook for him, his stomach seems to have half the available space for vegetables and grains as it does for, say, meat and chocolate.

After far too much worry and anguish about the girls' vegetable consumption, a more relaxed approach to feeding them has resulted in both of them developing a fairly healthy relationship with this food group. Some of the strategies that have helped are:

1. Using frozen cauliflower and broccoli, instead of fresh, because they have a softer texture, and less pronounced flavour;
2. Using veggies to make "faces" or other designs on their plates;
3. Putting one bowl of their favorite veggies on the centre of the table. Sibling rivalry makes them fight over it, and increases the chances they'll eat some;
4. The one bite rule: they have to "try" everything on their plate;
5. Using kid plates with sections and putting new/less favoured veggies in one section and filling the other sections with foods they love (sometimes they'll gobble down all of it, sometimes they'll only give the requisite single taste);
6. Giving them very small portions;
7. Roasting instead of steaming and seasoning with olive oil and Herbamare seasoned sea salt.

The most difficult thing is always getting them to try something new. Sometimes, no matter what I do they simply refuse. But an article about parsnips in last week's Toronto Star got me obsessing about this humble vegetable.

Parsnips are actually one of my favorites, but for some reason I rarely use them. I guess it's probably because I cook so many dishes inspired by the cuisines of China, Thailand and India, where they aren't often used.

According to the article, I am not the only one taking this vegetable for granted. Apparently Canadians really don't consume a lot of parsnips relative to other veggies.

It's a shame really, because they are absolutely delicious and chock full of nutrition. Related to the carrot, 1 cup of parsnips has 100 calories and 6.5 grams of fibre, and are a good source of vitamin C, vitamin K, folate, and potassium.

Regardless of their stellar nutrition profile, I just think they are amazing. To me, they are as sweet as candy, particularly when roasted. So I got thinking that if I prepare them correctly, the girls would have to love them.

Preparing them correctly is the key, of course. Roasting with olive oil and salt is essential, but then I wanted to season them in a way that would make them a bit more interesting, without scaring the kids off. So this means avoiding anything spicy, roasting them carefully so that there are no black/brown bits (caramalization), and adding no seasoning with too many dark, obvious, scary looking flecks of anything (i.e. keeping them as white and plain-looking as possible!).

Because parsnips are so naturally sweet, my first instinct was to just add cinnamon, but Little A easily gets turned off by the sight of the "brown" spice on her food. So I decided to experiment with some fresh grated nutmeg. The result: Fantastically yummy! And did the girls go for it?

Well, Little A refused to try them. Period.

Big A refused, although after I begged her to take one taste, she finally complied. Instantly (before it even reached her tongue!) she declared them disgusting. However, after Adam took the leftovers out to eat at lunch yesterday, Big A asked if she could have some, because she told us that she "loves them", and she gobbled them up! See, with kids you just never know.

Steam or microwave parsips for a few minutes, until slightly softened*. Toss parsnips with other ingredients and spread on a foil-lined baking sheet. Roast at 350F for about 10-15 minutes until tender.

*You can skip this step and simply roast parsnips for longer if your kids are okay with "black and brown bits" on their food.
Posted by Healthy Life Lessons at 7:44 AM