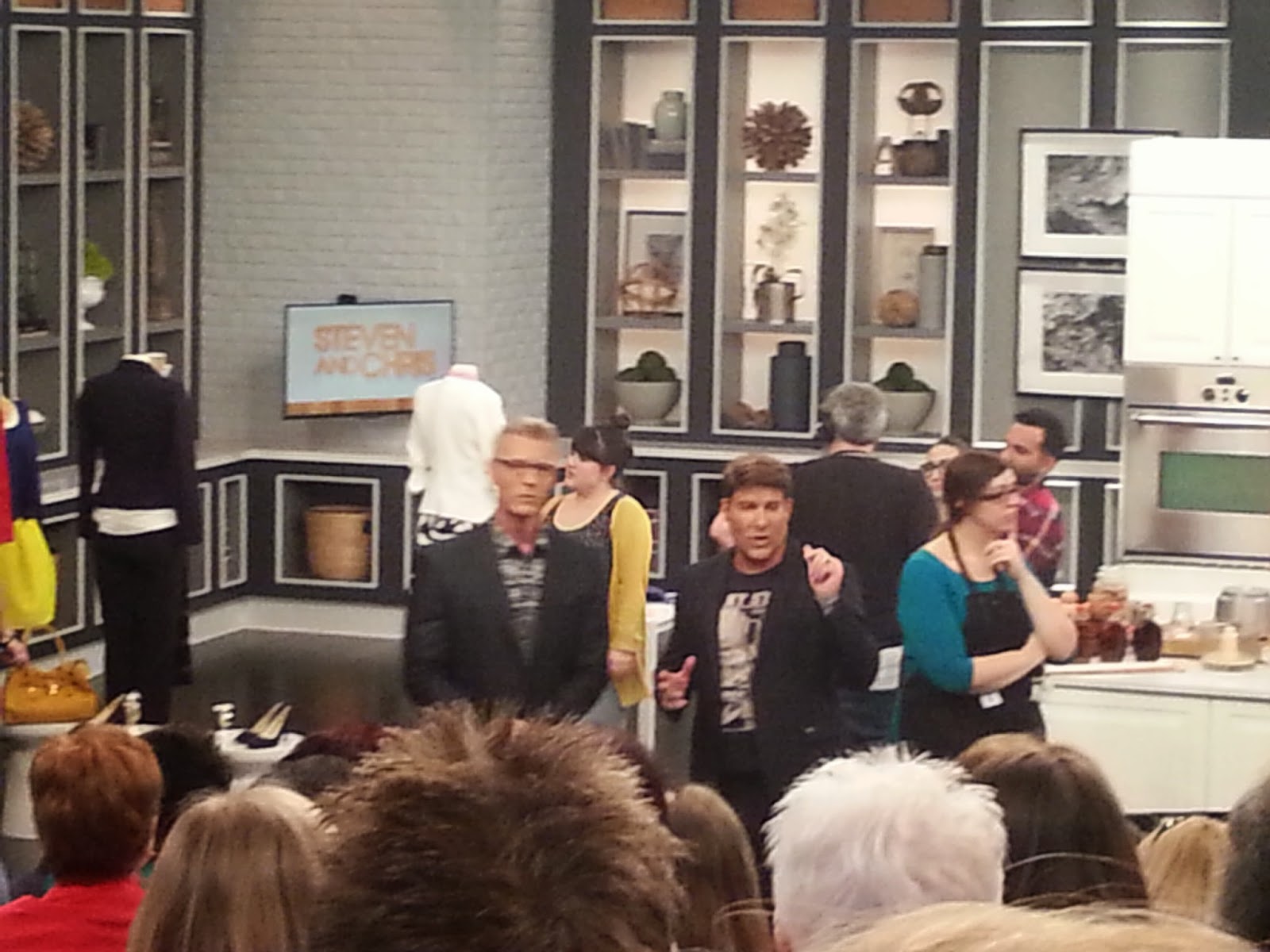 On Wednesday, I took my mother-in-law and a friend of mine to see a taping of the Steven and Chris show.  This is CBC's daytime lifestyle show.  I watch it during the week sometimes, while I eat lunch, if I am at home.

I like it because they are sweethearts, and I can honestly say they really are like that in person.  It totally comes across how genuine they are when you see them in person. I snapped that pic on a filming break as they were answering audience questions.

That being said, watching a taping of a television show is a great reminder of how misleading the media can be.

Shows like this often make me feel a bit inadequate.  The fashion models, the clothes, the celebrity guests, the décor features...I am no fashion plate, nor am I a DIYer!  I love watching this stuff, but I wear very simple clothes, have a very simply decorated home, and although I love to cook, I certainly don't have a knack for presentation nor 'artistry on the plate'. I just like food that tastes good that I can shove into my mouth!

When watching them set up the segments, however, you see just how much work goes into every single detail.  Literally a TEAM of staff sets up the kitchen counter for the cooking demo, and arranges the food on the plates.  Make up and hair artists primp every tiny aspect of the guests and hosts, and a guy waving a piece of paper at the audience prompts us to either clap or cheer wildly, whether we would actually do that or not.  Everything is planned, arranged, and manipulated.  No wonder my life doesn't look so shiny and perfect!

And that's thing, when it comes to television, or media in general, there are only shades of reality.  Even the news is not always an accurate representation of the truth.  When Adam was in Ottawa during the Parliament Hill shootings, he said the situation was blown out of proportion by the media.

Ironically, one of the segments on the Steven and Chris show that was being taped while we were there was with their parenting experts panel.  They were discussing this case about the "Free Range" parents who were charged by police for allowing their 10 and 6-year olds to walk home alone from the park.  The psychotherapist was saying how ridiculous this is (I agree!) and how the media and constantly increasing exposure to media, has completely distorted our perceptions of risk and danger.  I couldn't agree more.

So whether you are cruising Instagram, Facebook or television shows, remember to take everything you see and hear with a grain of salt! Just not too many, because too much sodium isn't healthy ;)

Today is a crazy, busy work day, and I also work tomorrow.  Then on Sunday Adam is taking Big A to see the Junos in Hamilton, as an early birthday present...she is so excitied!!  I am taking Little A and her best friend to the aquarium.  Have a lovely weekend!
Posted by Healthy Life Lessons at 5:02 AM