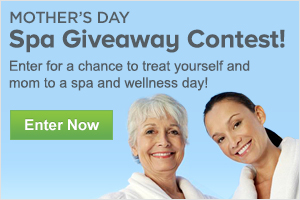 Who doesn't love a trip to the spa?  If I ever become a multi-millionaire, I think I'll build my own personal spa...or at least hire my own personal massage therapist and yoga instructor...who will also clean my house.

If you too love spas, then you'll love this: SpaFinder Wellness is giving away a Mother’s Day Spa package for two valued at $300 to treat a lucky reader and mom to a spa and wellness day. The contest closes on May 8, 2013.

You can enter here.

Spafinder has also offered me a $25 gift card to give away to one of my lucky readers.  Gift cards are redeemable at over 2,000 spas, yoga, Pilates and fitness studios in Canada (over 20,000 worldwide!).

This contest is available to readers Internationally.

Boy, would I love a little spa getaway right now.  Adam just returned from 10 days in Washington, D.C., and even though this trip was half the length of his London trip, it actually felt longer.  Both girls have been really challenging lately.  Big A is obnoxious and giving me attitude like she's already a teenager, and Little A is still screaming whenever she doesn't get what she wants.  She too has started to develop an attitude.  She keeps telling me, "You are not the boss of my body."  And last week, when I wouldn't let her open ALL of my nail polishes, and, instead, said she could chose one colour, which I would apply to her nails, in order to minimize mess, she started having a hysterical meltdown and yelled at me, "This is not just your house, it's everybody's house, but we always have to do things your way, it's not fair!"  Add to all this the girls constant fighting and I've been tempted to sell them both to the circus.

- If Little A begins screaming, she has to go to her room until she stops (not a new rule, but now I'm enforcing it consistently).
- If I have to ask either of them to do something more than once, they lose a privilege.
- When they start fighting, they have to work it out themselves, with no intervention from either Adam or myself, or go play in their rooms separately until they can get along.  This worked very well this morning to resolve a massive, screaming fight they were having with each other!

These rules seem to be helping to at least curb the behaviour after it starts, but it certainly hasn't helped stop it from starting yet.  But I suppose it takes time.  Parenting expert Alyson Schafer says when you start making changes like this, things often get much worse before they get better.

Overall it's been a tough spring and this seems to be something felt by a lot of people.  Most of my parent friends report similar difficulties with their kids, and everyone has been feeling totally down in the dumps because of the weather and what seems like mounting tragedies striking down innocent people around the world.  It almost seems surreal.  Last week we had a hail/snow storm in the middle of April, it was so bizarre.  And lately we can go from winter to summer like weather all in one day around here!  And then around the world horrific things keep happening.  People killed at the Boston Marathon?  Another child took her own life in the maritimes after being raped and then bullied?  Explosion in Texas?  The insane gun lobby in the U.S. won't back down, even after all the needless deaths and losses in Newton, Connecticut?  Of course, there are always tragedies happening all over the world, but these all seem so close to home.

I've decided my small random acts of kindness have not done enough to teach the girls about gratitude.  I am disgusted by all the "I wants..." I get from them, whether it's for me to make them food, and then for me to hurry up and make it faster, or they want dessert, or a material item.  A few weeks ago Big A said, "I want an Ipod Touch for my birthday."  I said, "You already have an Ipod." It's mine, actually, but I've let her appropriate it.  She said, "No, that's an Ipod Shuffle."  Little A then pipes up with, "Yeah mommy, she wants the one with the touch screen!"  Literally, my jaw dropped.  I am also sick of all their complaining: how far it is for them to walk to and from school (10 minutes), how unfair it is they have to make their bed, get themselves a glass of water instead of being waited on, etc., etc.  Give me a break!

So, I emailed one of the moms I know on the school's parent committee and asked what kind of initiative the school could take on that would drive home to the kids how fortunate they are, and what life is really like for others around the world (or even disadvantaged children here in Canada).  She loved the idea and said she's working on it.  I think my kids need a major wake up call.

After some warmer temperatures this week, we are back to cold, wet weather this weekend.  I am at least grateful to have Adam back home - I feel like a major weight has been lifted off my shoulders - and a fun weekend lined up.  Have a good one!