In case you have ever wondered: Hosting a birthday party for 14 6-year-olds in your home without hired entertainers (and tranquilizer darts) IS A BAD IDEA!

Ten minutes into the party on Saturday Adam began muttering, "Never again!" every time he passed me.  I couldn't agree more.

Apparently I suck at picking age-appropriate activities for kids.

They loved the t-shirt decorating, except I overestimated their ability to understand that the fabric paints were intended to be used like markers and drawn with.  Instead, they simply removed the caps and squeezed them as hard as they could shooting out permanent paint everywhere, and making such huge puddles of paint on the shirts that we had to scrape it off.

They were done (i.e. got bored) with that faster than expected.

Twister was even worse.  Big A was one of the few kids who knows her right from left, making it a pretty tricky game, and with so many kids, they had to play in teams, which meant the kids watching quickly got bored.

Much more exciting than Twister was jumping on our couches and throwing all the cushions off.  Just what we need, a broken bone and a law suit!

As happy as they were to have food, a number of the kids complained about there being no pepperoni.  Nevertheless, they still managed to eat their way through 2 extra large pizzas (whole wheat) and 1 small (gluten-free).

I made Bob's Mill gluten-free white cake for the cupcakes and iced them with my pink raspberry buttercream frosting.  I piped it beautifully on each one and topped it with a gummy candy.  But Saturday was warm and our kitchen was extremely humid, so unfortunately, the frosting melted down before I could get them to a cooler place.  In any case,  a number of the kids determined the icing to be 'yucky' because it tasted like raspberry.  Sigh!  At least Big A loved it. 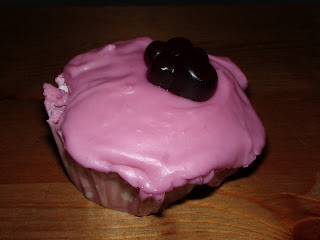 Hey, I've said it before, I ain't no cake decorator!

Thankfully, Big A's boyfriend's mom stayed for the duration of the party, since he's younger than all the other kids and she really saved our skins.  If it had been just Adam and I, I don't think we would have survived.  As it was, we barely did...it was the longest 2 hours of our lives!!
Posted by Healthy Life Lessons at 4:26 AM