Am I an extremist about nutrition? Well extremism is all relative!

I eat all food groups, I don't follow any type of diet and I eat a wide array of things.  The only things I really try my best to exclude are added sugars and refined flours/grains, as well as trans fats.  Frankly these are habits WE SHOULD ALL BE DOING.  The only reason this may seem extreme to some people is that the BAD (basic American diet) is so full of this crap.

Now perhaps I am extreme because I have eliminated this stuff from my diet - well, mostly anyways - rather than 'cut down' but I'll bet most people who have 'cut back' on this stuff still eat too much.

I don't cook or bake with sugar at all anymore.  I exclusively use stevia, xylitol, erythritol and coconut sugar.  I use limited amounts of even maple syrup, molasses and honey because they still affect your blood sugar the same way white sugar does.  Brown sugar is no better than white as its just white with a bit of molasses added.

Because of my anti-sugar stance, I was reluctant to try Truvia's new Brown Sugar Blend.  Why use any sugar?  Coconut sugar is much lower on the glycemic index, is much less processed, is a great substitute, and has a fantastic caramel flavour.  But I decided to entertain the interests of the moderates out there by giving it a shot.

Now I love stevia, but I know not everyone else feels the same.  Some brands are terrible, while others are amazing.  Nevertheless, there are some who are still sensitive to the slightly bitter aftertaste even in small quantities.  For this reason it is often blended with erythritol or regular sugar.  In this case, regular brown sugar (sugar and molasses) is combined with it as well as erythritol.

It looks and tastes exactly like brown sugar but has 75% less sugar since you use less based on its sweetness relative to regular brown sugar.   It has that soft, moist consistency whereas coconut sugar is rather granular.  You can always grind coconut sugar in a high powered blender to make it finer, but I've never tried this.  If you absolutely need to consistency of brown sugar this will do the job.

Anyways, since we were hosting a neighbourhood party I figured this was a perfect opportunity to try it out.  A lot of folks are not accustomed to healthy foods, particularly desserts, and there were going to be a lot of kids, so I wanted to make something with wide appeal.

I settled on an apple cake, inventing the recipe as I went along, as I tend to do.  It was awesome.  I say was because it disappeared very quickly.  Little A actually insisted on having a few pieces for breakfast the day after the party.  Healthier than most cakes, I agreed and we were all happy.

Now personally, I prefer to avoid sugar altogether as much as possible, but in cases like this, Truvia Brown Sugar Blend is a good option and may be good for you folks out there trying to cut down on sugar but not a big fan of pure stevia or other alternatives.

Disclosure: I was sent a complimentary bag of the product to try but all opinions on this blog are my own.

Stir together apples with lemon juice, Truvia and cinnamon and set aside.

Whisk together wet ingredients in a large bowl.  Stir dry ingredients together and add to wet.  Stir just until combined.  Batter will be thick.  Put 2/3 of batter into greased bundt tin.  Add apples next, and then spread remaining cake batter evenly over top of apple layer.  Bake at 350F for about 50 minutes or until toothpick comes out clean.  Cover with foil half way through if top browns too quickly.  Remove from over and sprinkle with cinnamon.  Let cool.  Keep in airtight container for 3 days or freeze. 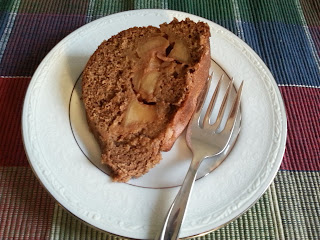 Posted by Healthy Life Lessons at 4:07 AM