Are you someone who is chronically late getting everywhere?  If so, you and I are a different breed.

The idea of keeping someone waiting horrifies me.  If anything, I tend to be chronically early, although since having kids that's lessened quite a bit.  Now I am at least right on the minute. 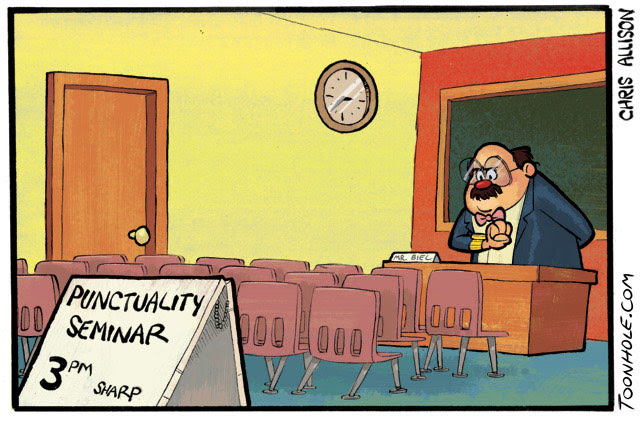 Not only am I rarely ever late, but I despise it when other people are.  I think it is incredibly rude and disrespectful.  One of the reasons I quickly knew Adam was the man for me is he showed up right on time for our dates every time.  No head games, no keeping me waiting.  It was so honest and refreshing, I was thrilled.  But if you know Adam and I, its not surprising, as we share many personality traits.

Research has indeed found a significant link between personality characteristics and punctuality.  Those higher in conscientiousness (i.e. actively manage their goals, to be organized, dependable, dutiful, orderly, self-confident, self-disciplined, and deliberate) are more likely to be punctual, as are people higher in agreeableness (i.e. traits like trust, straightforwardness, altruism, cooperativeness, courtesy, compliance, modesty, and tender-mindedness) and neuroticism (i.e. very sensitive and tend to destabilize under stress. They are described as anxious, depressive, self-unsure, impulsive, vulnerable, nervous, and irritable. To be late at a meeting is probably a very uncomfortable situation for anxious, overcautious, self-conscious persons, because there is a good chance that they will stand out and will be criticized).*  Yep, sounds like both of us.

While we many not be chronically late types, there are a whole lot of people out there who are!  Even my brother, the person closest to me in this world genetically, is chronically late.  My parents are like me so we often muse about where this tendency comes from.  My mother suspects it is a deliberate rebellion against our neuroticism.  Although like it or not, my brother is neurotic in his own way too.  I have to admit though, ironically, since having kids he's gotten quite a bit better.  Maybe its suddenly having a sense of responsibility to others.

Punctuality is very culturally specific though.  In North America punctual means being right on time.  According to my parents, when they lived in Kenya, they were shocked to discover that showing up 2 hours after the specified time is the norm.  That would make me lose my shit.

But I think even here in North America, the confluence of increasing distractions, coddling from parents, and growing narcissism is starting to change our own notions about the importance of punctuality.  I've heard employers talk about job candidates showing up late for interviews.  I can't even fathom why someone would that is okay!

As a professional in private practice, I can tell you it is practically the norm now for clients to be late.  Everything from a few minutes to a half hour.  Yes, some of it may be living in a big, congested city plagued by transit issues, but really some people are just consistently LATE!  I find it absolutely mind-boggling.  If I showed up late for a doctor appointment, for example, I would fully expect that they would have given my appointment time to someone else.

We were positively speechless at the fertility clinic a few months ago when a patient called to say she would be late to see one of the fertility doctors because, although she was at the subway station a block away, it had started raining and she didn't want to get wet, so she was going to wait there until the rain stopped. WTF?

The other thing about failing to be punctual, is it often causes the late folks undue stress and grief too.  Way back when I did my counselling training, I had a lot of anger management clients.  One big source of road rage and that kind of thing is people running late and then taking it out on everyone around them.  Duh, leave yourself more time! 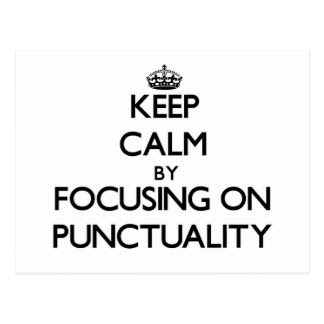 If you need some tips on how to improve your punctuality, check out this link.

Have a great day folks...and be on time!

Posted by Healthy Life Lessons at 4:57 AM