Um, not sure if you heard, but the 2015 Pan Am Games start today and they are being held in Toronto.

Sadly, few people I know are too excited.  Maybe a couple are planning to see an event here or there, but most people are dreading the whole thing because of the impact it is going to have (and already has had!) on our city.

For the last bunch of years construction in the downtown has been at an all-time high, and one reason is the creation of all the facilities for the games.  This has made an already congested city, just crazy to get around in.

There are now reserved High Occupancy Vehicle (HOV) lanes to control traffic and already sneaky (but stupid) people are trying to outsmart the cops by doing things like sticking mannequins in their car.  This picture hit the news yesterday when I guy got busted for this: 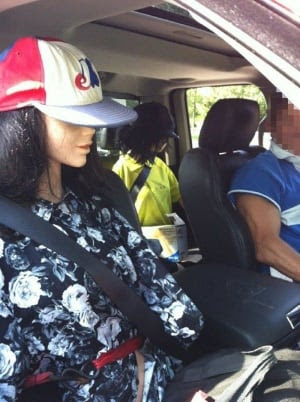 Sigh!  But it does give you some idea of just how frustrating it is to try to get anywhere these days and what lengths people will go to make it somehow easier.
I will admit, I fall on the side of the complainers (shocker, huh?).  But I hate watching most sports events so I wouldn't be excited about the games anyways.  That doesn't mean I don't support them in theory though!  Obviously anything that celebrates physical activity and athleticism in my mind is a good thing.  However, ask just about anyone in Toronto and they will tell you that living in this city has gotten exceedingly difficult due to the sub-par transit system and rapid increase in population.  Its just too crowded, too busy and takes too long to get anywhere! This city does have some very unique and amazing things going for it, but I'll save that discussion for another post.  Right now, I ask you to cross your fingers for all of us here, that everything goes well: for the athletes and organizers, and for the residents, holding our breath to see just how much this event will disrupt an already disgruntled city!
Have a wonderful weekend...and check out the games on television if you're into that sort of thing!
﻿

Posted by Healthy Life Lessons at 4:44 AM