I would say thank goodness its Friday, except today is totally nuts, packed full with clients, and I work tomorrow.  Then Saturday night Big A is having her first sleepover party at our place (wine, sleeping pills and ear plugs anyone?).  Oh, and there's this douche-bag cold I have.  Colds always feel worse in warm weather don't they? 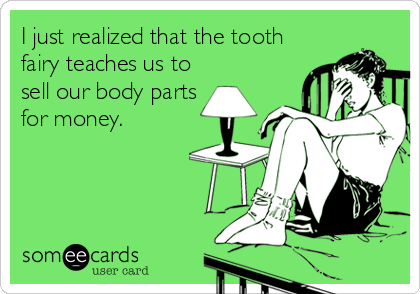 Its not been the greatest week.  Adam away until Wednesday and I was not at my best.  Monday night I set the wrong alarm at bedtime (Adam usually does it, and turns it off in the morning as he gets up first), and ended up setting it off when I came down the stairs at 5am.  Somehow it didn't wake the girls.  Tuesday I was tired and grumpy from a bad sleep and had to pick up Big A from school because she said she wasn't feeling well.  I am pretty sure she was faking, but I wasn't torn up about missing the school concert, which my mother-in-law diplomatically described as, "...somewhat less painful than waterboarding." Ha ha!

Little A lost a front tooth Tuesday but we all went to bed at the same time that night so I had to do my Tooth Fairy duty in the morning...another task usually left to Adam.  I was nervous about pulling it off and it went as terribly as I'd thought it might.  When I opened her door I woke her, which surprised me, making me knock her tooth box on the floor and the tooth disappeared.  Luckily she had to go pee, so I was able to flick the light on and recover the tooth, leaving $2 in its place.  I told her I'd heard a noise in her room and came to see what it was.  She seemed to buy this explanation when she got up a few hours later and we agreed I probably scared to Tooth Fairy away.  Adam and I don't really care if the girls believe these things, but its kind of fun to see what you can convince them of.  Later, however, she said to me, "I think the Tooth Fairy is you and daddy...there aren't any fairies, just in fairy tales."  Ha, smart kid!

The good ness is I woke up today feeling much better.  I've noticed that I get sick much less often compared to when the girls were younger, and when I do get sick, it only lasts a few days, compared to a few weeks.

Well, gotta start my crazy busy day, so enjoy your Friday and have a happy, healthy weekend!
Posted by Healthy Life Lessons at 5:00 AM