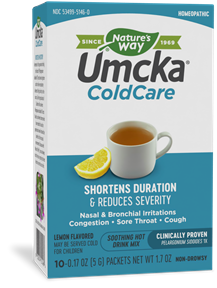 A few weeks ago Adam started freaking out because he felt himself coming down with something. It was one of his busiest times at work and not a good time to be getting sick.  Fortunately, Nature's Way recently sent us a box of their Umcka ColdCare to try.  Adam starting taking it immediately to try and stop his symptoms from worsening.  In his case, it seems to have worked to have at least prevented him from developing a more serious illness, though he's still coughing a bit.  It comes in little packets that you mix with hot water and drink like tea.

It contains a homeopathic compound that supposedly shortens the duration and reduce the severity of cough, congestion, sore throat, nasal and bronchial irritations. If truth be told, I have read almost nothing that supports the efficacy and validity of homeopathy, however, I did find a number of studies that have found some evidence that it's active ingredient (EPs 7630), an extract of extract of Pelargonium sidoides (a plant native to South Africa) has anti-viral properties and can improve immune function (I actually did find some scientific studies supporting this).

Here is some info about Umcka from the website:

I do like that they don't add sugar, and use xylitol instead. It also contains citric acid, maltodextrin, natural lemon flavor with other natural flavors, silica,and, yellow color (from turmeric).

Its always nice to have a soothing hot drink when you are feeling sick, but Umcka ColdCare can also be taken cold. Its safe for both children and adults and you can take several a day.

So what do I think? Well apparently it can't hurt, and its definitely a better option than NeoCitran, which aside from the OTC meds also contains:

Yuck!
So if you enjoy a hot lemon drink when you are feeling under the weather, this is definitely superior to the conventional drug store products and might lessen the severity and duration of your illness.

Disclosure: I was sent a sample for free but all opinions on this blog are my own.
Posted by Healthy Life Lessons at 4:27 AM