Good morning! We are having beautiful fall weather predicted for this week.  Happy, happy, joy, joy!!

How was your Halloween weekend?

Actually, it was pretty good, all things considered.

The rain held off until 8pm on Saturday, just when most kids were heading home anyways, which meant we didn't have anyone ringing the doorbell while we were getting the kids to bed.

Adam took the girls out trick-or-treating while I handed out candy.  I don't really enjoy either task, but handing out the treats wasn't too bad this year as there were fewer rude, obnoxioius kids than usual.  Just two girls without any costumes on.  WTF? When I inquired, they said they were under their jackets, which was clearly a lie since they couldn't tell me what they were nor offered to show me.  Couldn't they have even thrown on masks or hats at the very least?

The girls had a ball making me look like a freak.  In fact, a lot of kids looked a bit scared when I answered the door. 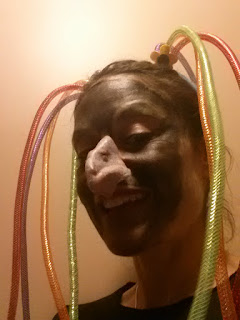 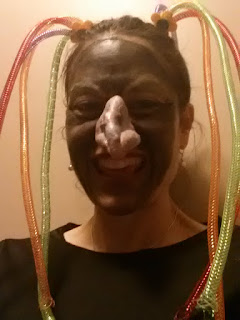 The girls were dressed as the Statue of Liberty and Hot Dog (again!), in honour of my NYC roots maybe? 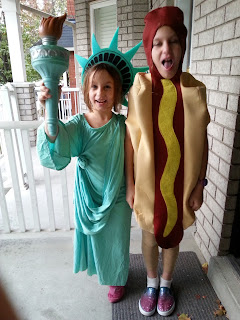 I am just glad there were no princesses!!

Adam and I agreed to let the girls choose 10 pieces of candy to keep each.  We thought they would eat a few over the weekend, and then take the rest in their lunchboxes to school.  Well, Big A set aside a few for that purpose, but Little A ate all 10 of hers Halloween night. One after the other.  And no, she wasn't sick.  That kid!!

It was also the Fall Back time change, but instead of luxuriating in an extra hour of sleep, my eyes sprung open on Sunday morning before 4am.  Sigh.

Have a great start to your week...I hope you don't have a candy hangover!!
Posted by Healthy Life Lessons at 4:49 AM