There are few cookbooks that I am truly excited about.  This was an exception for two reasons: One eating low-GI foods are generally healthy and the kinds of foods I eat anyways, and two, because Adam and I got a slow-cooker for our wedding 11 years ago and I have been wanting to try it out, but for some reason I've had a slow-cooker phobia.  I think it's the idea of an electrical appliance being plugged in for hours, potentially when you are either sleeping or not home.  I just used to envision the house burning down or, at the very least, the food getting burnt to a crisp.  I know, it's totally irrational!  So our slow-cooker is essentially brand-new (albeit over a decade old!) and I am a slow-cooker virgin.  I decided being sent this book to review was the impetus I needed to finally use a slow-cooker.

The book gives a bit of background about the glycemic index (GI).  What I like is it is not a diet plan.  I think most diets are ridiculous and generally unrealistic for most people to follow long-term.  The glycemic index is more like a nutrition tool that can help you understand which types of carbohydrates to consume more often and which to consume less frequently.

The GI is a 0-100 scale that ranks carbohydrates based on how quickly they raise blood sugar and insulin levels.  Low GI foods have been shown to positively affect health and weight control by keeping blood sugar steady and helping to control appetite.

The book also explains glycemic load (GL), or a food's GI multiplied by the net carbs in a serving, divided by 100 (GL - (GI x Net Carbs)/100) which some experts believe is a more important measure of food than GI, because the GI of a food is affected by what you eat with it (i.e. protein slows the rate at which blood sugars and insulin respond to carbs).

If you want a general overview of dietary recommendations related to GI, the authors suggest:

The recipe chapters cover a wide range of dishes and meal types and are divided into the following:

The book also has appendices that provide the GI score of many foods, grocery shopping tips, conversions and online and offline resources.

The book is small with a stiff spine, so you will need one of those cookbook holders if you want it to stay open on the counter so you can refer to it while you cook.  There are also no pictures.  But, flipping through it, I'm quite pleased.  The recipes sound great and use mostly ingredients I prefer to use.  For example, the only sweetener used is coconut sugar (no white sugar), and oat flour and coconut flour (no white flour!) are frequently used.  Many, if not most of the recipes are also gluten-free.

I decide to go with a simple recipe for my first slow-cooker attempt.  The Herb Roasted Chicken sounds great.  Just onion, garlic, lemon, herbs and spices.  No oil or butter, etc.

Not only have I never used a slow cooker, I've never roasted a whole chicken.  I know, weird for a Jewish omnivore!

The only thing I was confused about was that our slow cooker instruction booklet said to add water when roasting a chicken, however, this isn't mentioned in the cookbook.  But when our neighbours came over to show off their beautiful new baby, they mentioned the importance of adding water so the meat doesn't dry out.  So before we left for the beach, I quickly lifted the lid and poured in about a cup of water.

So on Canada Day, I got everything going at about 10:30am.  It looked something like this: 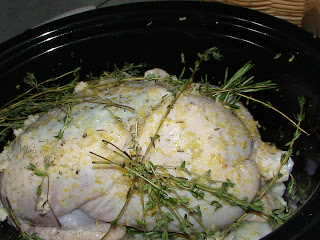 When we got home around 6pm, it looked something like this: 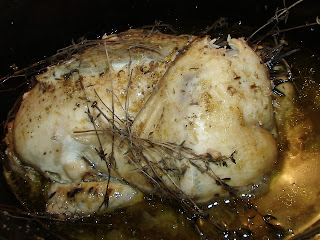 As promised in the cookbook, the dark meat was fall-off-the-bone tender.  But the breasts were a little dry.  Clearly I should have gone with closer to 6 rather than 8 hours, but I guess like many things you have to learn with some trial and error.  I also loaded up the herbs because I love fresh herbs, but it turned out not to be popular with the kids or even Adam: add rosemary to the list of things that I'll have to enjoy on my own!  Okay lesson learned.  Next time I'll skip the rosemary and cook it for less time.
There were lots of tender onions and juices at the bottom with which to make a gravy and I was impressed with how easily I was able to clean the slow cooker's Corningwear baking dish which comes out of the base.
I will definitely be using our slow cooker again and now that I am more confident it won't burn down our house, I'll be experimenting with all sorts of things.  But before I start ad-libbing, I'm going to try some more of the great recipes in The Low-GI Slow Cooker book.

Some of the book's other recipes that sound good:

Wow, as you can see, there are a lot of great recipes in there and most are super healthy.
If you love your slow cooker and are looking for healthy meal ideas, I highly recommend this book.
﻿
Posted by Healthy Life Lessons at 4:36 AM