You are Not Lazy!

Most people (except my husband who is super-human) avoid certain activities because, they tell themselves and others, they are lazy.

What does it mean to be lazy? Laziness, according to Wikipedia is:

...a disinclination to activity or exertion despite having the ability to do so. It is often used as a pejorative; related terms for a person seen to be lazy include couch potato, slacker, and bludger. 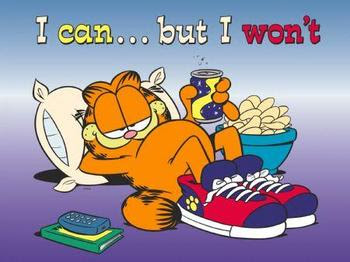 There is no doubt that laziness has negative connotations that are deeply ingrained in our culture.  It is, after all, one of the 7 deadly sins according to the Catholic tradition.  And in our competitive, capitalist society, we are obsessed with 'doing' as opposed to just 'being'. Most of us feel guilt if we are not constantly busy and being productive.

In any case, I often find with my clients that they attribute their refusal to adopt healthy living habits, such as exercise or cooking meals, to laziness, which they seem to assume is a stable personality trait.  Unfortunately, this becomes a self-fulfilling prophecy in that they have convinced themselves they are unable to change and therefore don't.

Self-criticism is never an effective way to motivate yourself to make positive change.  Positive change can only happen with a positive mindset.  If you do not believe you can achieve something than this is most likely true.  So I think we need to stop telling ourselves we are lazy, not only because it is self-destructive, but because most of the time it isn't true.

My own experience recently illustrates why this is the case.  I used to ride my bike everywhere all the time whenever possible.  Basically only significant amounts of snow and ice would stop me.  But over the past several years I have been relying more and more on other less active modes of transportation like driving or taking the subway or bus.  I started getting really down on myself, accusing myself of becoming lazy.  "Why am I not motivated to ride my bike as much as I used to?" I kept asking myself, "What's wrong with me, I have become so lazy."  But laziness didn't make sense.  I am still very active and fit, I still love exercising and moving my body every day, so based on the strict definition of laziness, this wasn't true.  So what was really going on?  After thinking about it, I realized the reasons I don't bicycle as much as I used to are:
Really, its not laziness at all, but specific - and I would say valid - factors about riding that have made me simply enjoy it less.

Lack of enjoyment is generally behind people's refusal to adopt healthy habits too.  But most of these can be overcome!  For example, I know a woman who detests sweating, yet she is extremely fit.  She goes for a rigorous swim at the JCC every day and, now in her 60s, is fitter than most 20 year olds.  There are so many types of exercise, there is going to have to be one you enjoy!  Likewise, if you think you don't like vegetables, you just haven't tried them prepared in a way you enjoy them yet.  With so many veggies and so many methods of preparation and recipes out there, its impossible to hate them all!  Cooking too, can be organized in a way that minimizes the stuff you dislike.  Hate cutting? Nowadays fruits, veggies and herbs all come precut.  Batch cooking can help you cook once while making food for multiple meals.

Before you berate yourself for being lazy, think about what it is you are avoiding doing and spend some time really thinking about why.  I'll bet its not because you are lazy but because it is simply something you don't enjoy.  And, hey, that's natural, after all, we are hedonistic creatures!  So do some problem solving and come up with ways to make the activity more enjoyable for you.

As for me, I think I am going to at least invest in a basket, and panniers so I don't have to lug a heavy back pack while riding, and a water bottle holder so I can have a cold drink for my rides in hot weather.  That will help overcome some of the things holding me back, but you know, I think I am done with winter riding.  Its just too unpleasant and too dangerous.  And I've made peace with that.  Its not laziness. Its wisdom!

Okay, I'm off to work now...on my bike!  Have a lovely, healthy, active weekend.

Posted by Healthy Life Lessons at 4:48 AM