Free to Be You and Me 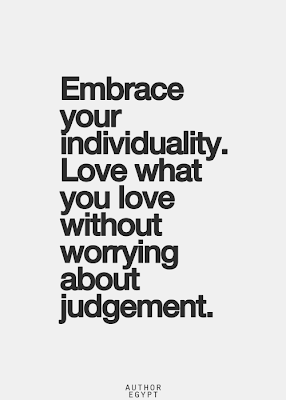 Like most kids, I never wanted to stand out. Being Jewish in a small, pretty homogenous city was enough 'being different' for me.

I felt very different though.  Not just the being Jewish thing, but my family culture was different.  My parents - reacting against their own family cultures - were very anti-materialism.  They focused exclusively on cerebral matters, and topics of discussion were politics, arts and literature...not fashion and pop music.

Unfortunately, I happened to go to an elementary school that was full of privileged kids and what you were wearing and what you looked like was of utmost importance.  But my parents refused to give in to that.  No matter how much I begged, I was not bought an overpriced Benetton Rugby shirt that all the other cool kids had.

I never felt I lived up to most of the other kids.  I can't blame that entirely on my wardrobe (I was also a privileged and very well dressed kid...this stuff is all relative, of course).  Other aspects of my parents' parenting did not arm me with high self-esteem, and I think I was just born with a very sensitive temperament.  I also was not a very gifted athlete and athletics were a measure of popularity at this school...probably one of the reasons I hate team sports to this day but became determined to be super fit in 9th grade.

So yeah, I probably still carry a lot of baggage around with me because of all this and it absolutely affects my parenting.  I am hyper-sensitive to how other kids treat my daughters.  Any sign of rejection or bullying and my heart breaks into little pieces and brings me right back to the intense pain I remember feeling myself.  Unfortunately, I am learning that looked through the lens of myself as an insecure kid is not the best way to parent these kids, because they are not me...which is a very good thing!

Big A, in particular, couldn't be more different than me.  This means we are often at odds with each other because I have a great deal of difficulty understanding her and she tends to push my buttons.  Adam says she is much more like he was, and this - fortunately - means he gets her, and they are very close.  I am so grateful she has such an amazing dad!

Big A has always been quirky.  She likes to be different.  She never brushes her (thick, curly, and unruly) hair and tends to wear the same couple of weird, mismatched, ill-fitting outfits.  This is despite the fact that I have been the parent who races out to get her all the coolest, latest clothes.  All that sits in her closet unworn, will day in and day out she pulls on clashing items of clothes that are often too big or too small.

Even though this makes me crazy, I have learned that this is not a battle to pick.  Its superficial and I don't want her to feel I am being critical...although sometimes I do beg her to wear something different once and a while.  She has been stubbornly picking out her own clothes since she was 18 months old.

What's wonderful is that she is super confident, not at all self-conscious, and seems not to care what anyone else thinks.  She is also not the least bit critical of others.  She never comments on others' appearances and seems generally unconcerned with superficialities.  This is fabulous (unlike her sister who has already internalized that pretty = white skin and blond hair!!).

But my great fear is that if she isn't already the target of bullying (she at least doesn't report any), that she soon will be.  Girls, particularly tween girls, are MEAN. I so want to protect her from this pain! I recently, however, realized that I have to let go of all this, which is really more about my emotional wounds and insecurities, and let her just be herself.  Its so important as a parent not only to learn to accept yourself (because kids pick up on it if you don't!), but also to accept our kids as they are.  So many times we want them to be what we were not, so we can live vicariously through them and this just isn't fair. Instead of trying to change Big A, to try to protect her from being hurt (which would make her feel criticized by me), I am going to have to just take a step back and, if she does indeed experience rejection, be there to reassure her that she needn't change because she is perfect just the way she is.

So here's to uniqueness and having the freedom to be who we want to be!
Posted by Healthy Life Lessons at 4:42 AM