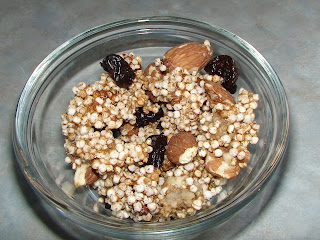 This is so yummy it doesn't need to be just for Passover. Or for individuals who avoid gluten.  Or for people who like healthy food.  It's good for anyone, anytime.

When it was baking, Big A ran into the kitchen to find out what I was making because it smelled so good. Even picky-pants Little A liked it and had a tantrum when I told her we were waiting until Passover to start eating it.  Well, Passover's now here, so dig in!

Enjoy a handful as a snack or serve with milk or yogurt.

Place quinoa and almonds in a large bowl.  Whisk together almond butter, agave and vanilla in a small sauce pan over medium heat until smooth.  Remove from heat and pour over quinoa and almonds.  Add apple sauce and salt and toss everything together until well combined.  Spread mixture evenly over two non-stick baking sheets.  Bake at 350F for 15 minutes, stirring and rotating baking sheets every 5 minutes.  Let cool.  Toss in dried cherries.  Store in an air tight container.

This recipe has been shared with Vegetarian Mamma's Gluten-Free Friday and Diet, Dessert & Dogs Wellness Weekend for Easter Weekend 2013!
Posted by Healthy Life Lessons at 5:00 AM