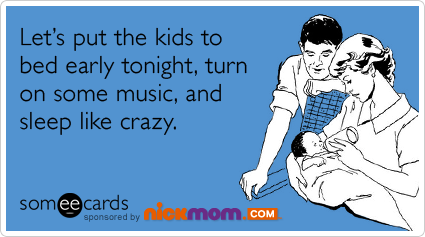 February gets a bad rap around here for being a crappy month, but frankly I think March is worse.  I am only beginning to get winter fatigue in February and its the shortest month of the year.  By March, I am definitely sick of winter and often the weather still sucks and the month is 31 days long!  Unfortunately, as I often complain, Toronto really only has two seasons: winter and summer, and I hate them both.  Our beautiful 'transition' weather in spring and fall is more like a blip in what is our usual temperature extremes.  Oh well, looking on the bright side, I am grateful that we rarely have natural disasters in this area, so hallelujah for that.

It was an interesting week around here.  For the first time in as long as I can remember, I made a meal intended for Adam and I (a vegetarian pasta with roasted zucchini and peppers and sauteed kale in a tomato sauce) that the girls were BOTH willing to eat!  Big A even ate the vegetables!!  I'm trying not to get too excited, but I'm hoping this is the start of a new trend...

Little A has been pretty good, although she has had her moments.  Twice this week she insisted on leaving her beloved Pink Bear at home even when I repeatedly asked her if she was certain she wanted to do so.  Both times as soon as we got to daycare she pitched a huge fit and began screaming at me to go home and get her (she insists Pink Bear is a girl).  Both times her daycare teachers had to take her hand and shove me out the door and calm her down.  Both times she ended up having a stellar day and was actually in fine spirits at pick up time, proving she really can live without Pink Bear!  But believe me, I wholeheartedly encouraged her to bring Pink Bear along for the remainder of the week.  She can take the stuffy with her to university, for all I care, as long as she spares me the crying fits.

In a better moment, she summed up what she feels is the difference between the sexes: "Girls have 3 holes and boys only have 2."  Yep, that's pretty much it.

Last night was also a bit of an adventure.  Little A decided she was ready for us to remove the railing from her bed.  Unfortunately, she got scared and woke up several times during the night and then decided she'd had enough at 5am.  Luckily, Adam was able to convince her to go back to bed about 20 minutes later, by agreeing to put the railing back on, and she then slept until almost 7am.  Nevertheless, I am sure she will be tired and extra cranky by late this afternoon.  Perfect!

Random acts of kindness this week included shovelling snow for our neighbours on both sides and making a point of asking everyone around me who looked like they might need help if they needed help (disabled man struggling to get to a seat without falling after the bus lurched out of the station suddenly, couple trying to carry their large stroller down the stairs of the subway station, guy across the street spinning the wheels of his car in the ice as he attempted to pull out).  I know it's nothing major, but I think it all makes a small difference in some way.  One thing I've noticed is that beyond the usual bystander apathy that occurs in public spaces, the use of modern technology has also made people oblivious to what's going on around them.  I don't have a smart phone and my Ipad has no SIM card, so I don't use technology when I'm in public spaces.  Instead, I do a lot of people watching and what I see is that everybody else is completely engrossed in their technology (surfing the net, sending emails, talking on the phone, playing games, etc.).  We know about the physical dangers of doing these things when driving, however, I worry about what this trend is doing to social relationships.  We seem to be engaging with our gadgets more than we do with each other!

Well not in our house anyways.  Mostly because we are too cheap to have the latest gadgets, but none of us are technophiles either.  So this weekend, we are going trampolining (more on that later), Little A has a birthday party and Adam has a book club meeting.  And none of it involves any gadgets!

Have a lovely weekend.


Posted by Healthy Life Lessons at 4:50 AM