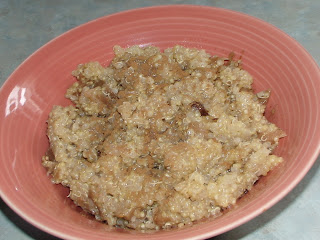 Since Adam usually eats oatmeal for breakfast, I thought I would create a quinoa porridge for him this year for Passover.  After all, it's still freakin' cold here, so I know he will appreciate something hot to eat in the morning.

A few years ago I bought him quinoa flakes to make porridge with and it was a big failure.  The smell made both of us gag, and he thought the texture was awful too.  In contrast, using the quinoa intact produces an absolutely delicious hot cereal.  If apple cinnamon isn't your thing, you could do orange zest and cranberry, cherry and almond extract, apricot and ginger.  The options are endless!

What's nice, is you can make this ahead of time and reheat as needed for a quick, satisfying breakfast.

Place milk, sweetener, vanilla pod and seeds, cinnamon and salt in a large pot.  Cover and bring to a low boil over medium heat.  Add quinoa and turn heat down to med/low.  Cover and cook until quinoa softens and porridge starts to thicken.  Add fruit and stir.  Recover pot and turn off heat.  Let sit for 10-15 minutes.  Serve with additional milk and/or sprinkle of cinnamon, if desired.  Keep refrigerated for 4-5 days.
Posted by Healthy Life Lessons at 4:50 AM