During the Raisin Exercise we did during my first mindfulness session, I had an epiphany: Perhaps mindfulness can be used to help kids overcome picky eating habits!

You see, mindfulness is growing in popularity as a means of improving people's relationship with food.  In most cases, however, it's ultimate goal is to get people to eat less by, perhaps, realizing that they can be satisfied by smaller portions, or that a donut is not worth the calories, because when they eat one mindfully they realize it doesn't actually taste that good, etc.

But during our exercise, something else happened.  One woman in the group admitted that she was dreading it because she hated raisins.  As we did the exercise, however, she realized that she simply finds them ugly.  When she took the time to really focus her attention on the experience of eating one, however, she discovered that she actually finds they have a pleasant taste.  This got my mind going...

If you are a parent, then you know that kids often draw prejudicial conclusions about foods because they don't like the name (eggplant!), or the colour, or the texture, etc.  So maybe showing children how to eat something mindfully could help overcome this.  In addition, since the table often becomes a battle of wills between kids and parents, trying new foods, or giving foods a second (or third, or 100th) chance frequently fail.  Perhaps, I thought, if tasting was introduced in a positive way, with kids being given the opportunity to voice their opinions (rather than being yelled at for saying something is 'yucky' maybe this would put them in a better frame of mind for being open to new things.  So I designed an experiment for the girls.

I made up a plate for each of them with a small taste of a variety of foods.  Some that I knew they don't like, some that they do, and some that even I wasn't sure of.  The plates consisted of: 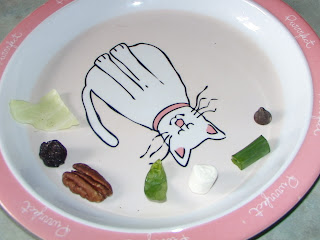 I then explained to them that we were going to play a game.  That they had to taste each item, in order, and that they must not spit out anything.  They had to slowly examine each one, smelling, listening to, and visually examining it BEFORE popping it in their mouth.  They also had to describe each item to me.  Then they could put it in their mouth and describe how it tastes and what they thought of it.

The experiment was a HUGE success!  Little A would usually refuse to even try any leafy things, and she generally tries to spit out what she doesn't like.  In the end, both girls discovered that they like fresh basil - previously referred to as 'green bits' that had to be scraped off anything -, and Big A discovered she likes green onions!  Even though Little A did not like the onion, she ate it pleasantly and simply described it as 'yucky'.  Both girls also really liked the cabbage, and Big A also liked the pecan.  Little A did not, but we already knew she doesn't really like whole nuts that much.  Both loved the dried cherry, marshmellow and chocolate chip, but I already knew that too!

The best part was that they loved the whole process and have been begging me to do another one with them.  To be honest, I am guessing that what appealed to them most about the whole thing was being able to taste things in a relaxed environment, and feeling like their opinions mattered and they were being heard.

I am very excited about this revelation...I'm thinking there may be real potential here for overcoming pickiness in children...

I didn't do wonderfully this week with any random acts of kindness.  I did donate a whole whack of pretty much brand new books to our local library, but, sadly, not much else.

Maybe I can do something this weekend.  Maybe you can too!  Maybe you will also try eating something mindfully and discover something new.

Kindness is an inner desire that makes us want to do good things even if we do not get anything in return.  It is the joy of our life to do them.  When we do good things from this inner desire, there is kindness in everything we think, say, want and do.

- Emmanuel Swedenborg
Posted by Healthy Life Lessons at 5:17 AM