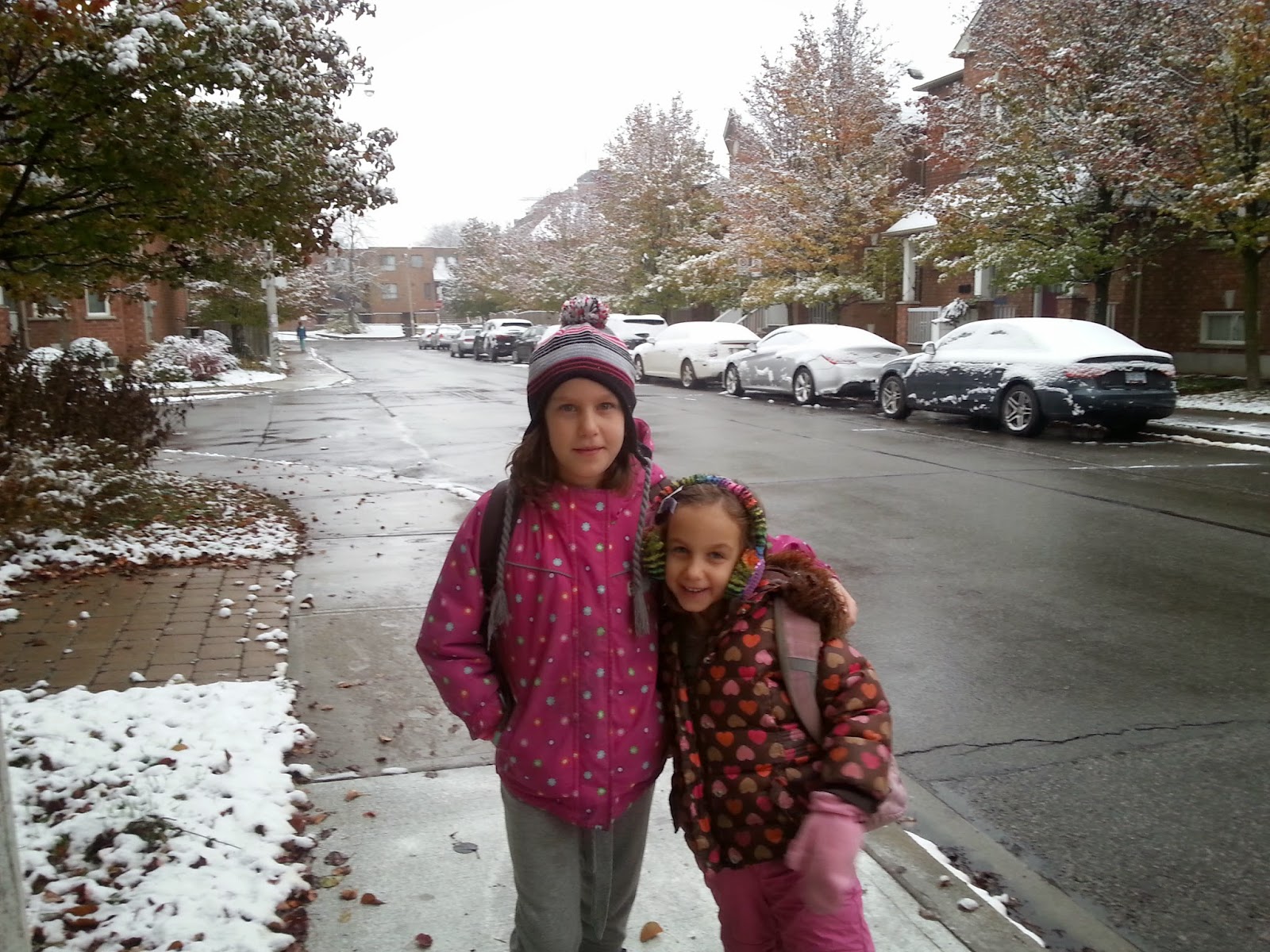 Good Morning! I hope you had a nice weekend.  We woke up to a winter wonderland this morning.  Good think the girls were cooperative, or actually, pretty excited, to get all dressed up in their winter gear.  Don't they look cute?

I can't help but brag a bit about my girls.  They got great report cards last week and we had lovely parent-teacher interviews.  I am so proud of them!

Big A is a good student, but what makes me so incredibly proud of her is just what a good person she is.  It was noted on her report card and by her teacher in person, that she is very kind and helpful to all the other kids.  All.  She is not clique-y at all.  And she apparently is learning not to be as bossy as she used to be.  I would say that between her kindness and her assertiveness/confidence, she has the makings of a very effective leader (CEO, politician...), ha ha!!

Little A is miss smarty pants, blowing away her teachers with her clever questions.  She just still has to work on 'controlling her emotions' and not distracting the other kids by chattering with her best friend so much.  Nevertheless, the teachers are very pleased with her progress and academically she is doing great (she's going to be a Nobel Peace Prize winning scientist I think!).

Aside from the girls fighting, which, at the very least, is much less frequent these days, and some serious spoiled-brat-like behaviour (i.e. whining about having to walk 7 minutes to school, sulking because they can't have what they want whenever they want, etc.), I'd say we're in a pretty good place around here.  Big A is so grown up sometimes it amazes me.  She can still act like a 2-year-old though.  Little A is still prone to tantrums too, but she has them less often and I am loving the last vestiges of her 'babyness'.  She is still so cute and cuddly and silly and impish.

Older people with grown children always warn me it all goes by too quickly and I get it.  I already can't wrap my mind around the fact that Big A is 8.5 years old.  It won't be long until I've been a mom for a whole decade!  And yet I still feel like a kid myself!!

I can't help but be relieved to be at this point where we no longer have preschoolers or babies and the girls have a degree of independence.  I sometimes forget that they are now capable of doing certain things themselves, which means that as a family we have more freedom and ability to do all sorts of things that weren't possible before.  But there is also part of me already mourning the loss of my little monkeys.  I am sure it won't be long before they want nothing to do with me and spend all their time with their peers and just roll their eyes when I address them.  Those days are coming for sure.  And in the blink of an eye they'll be leaving for university and Adam and I will be empty nesters.  Gasp!

Fortunately, since they are both going to be extremely successful and wealthy, they'll be able to fly back and visit their old parents regularly. HA!

Well, here's to family, and hoping I don't screw mine up too much!!

Posted by Healthy Life Lessons at 6:20 AM