Got Away From It All 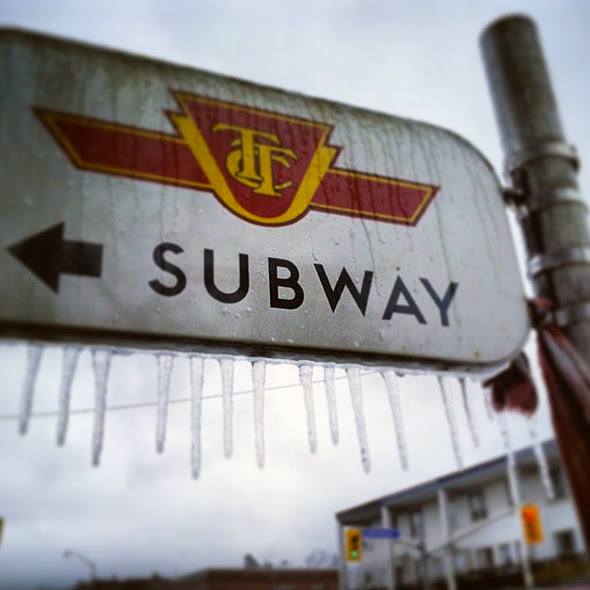 Hello!  I hope you had a nice holiday.  If you live in the Toronto area, you might not have, unfortunately.  There was an ice storm just as we were leaving for Florida on December 22nd, and when we got there we heard power got knocked out for most of the city.  Our neighbours emailed us and said we were fine, thankfully, but many of our friends were not so lucky.

We got back from Florida and saw a ton of broken trees as we drove home from the airport.  When we stopped to pick up some groceries, most of the stores had empty shelves because they'd all just recently gotten their power back.  It was surreal.

Apparently our power was only out for 3 hours, but Adam's parents' was out for many days, so this past weekend, Adam had to go over there and empty their fridge and freezer (they are still in Florida).

Man, we feel so lucky.  We were enjoying warm weather, swimming and shopping while the rest of the city was in complete chaos.  Apparently ice melter/salt is nowhere to be found anywhere.

Our vacation wasn't perfect, however.  Both Adam and I got a stomach bug (likely caught from Little A) as soon as we got to Florida.  No barfing, thankfully, but lots coming out the other end.  Then, just as we were feeling better, I came down with the bad cold my little nephew brought with him.  So now I'm getting over that.  Nevertheless, we both feel quite refreshed, since we ended up just sleeping a whole heck of a lot.   A few nights we both slept more than 10 hours, which is normal for Adam on vacation, but definitely not for me!  Feeling so crappy also meant we had few indulgences...we just weren't in the mood, and oddly enough, despite my queasiness, fruit and veggies were going down just fine, so I was able to eat healthy.  I just didn't have my usual appetite (which, Adam always tells me, means that I ate like a 'normal' person, and not 4x a normal person).

The girls had a fabulous time playing with their cousins and swimming.  I managed to be well enough to make 2 trips to the outlet mall.  Hee hee!  I scored with a sweatshirt from Under Armour, 2 sweaters from Banana Republic, a pair of pants from Guess and 2 pairs of shoes from Nine West.

I have to say, now that they are 4.5 and 7.5, the girls are much easier to travel with.  The only melt downs happened upon landing during both plane rides because Little A gets ear pain.  I sympathize because I have always had problems with my ears on planes.

I am basically off work until Friday (I have a full day on Friday though!), so I plan to enjoy my time off...although I will be busy for the next few days preparing for our party on New Years Day.  Have a lovely Monday.  If you live around here, bundle up, it's supposed to be a freezing one.
Posted by Healthy Life Lessons at 5:39 AM