Every Cloud, Raindrop, Snowflake and Heatwave Has a Silver Lining 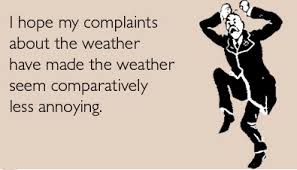 It's Friday!  So I thought I'd finish the week off with a little rant about the weather.  Seriously is it too much to ask to live in a climate that isn't at one extreme or the other more than 300 freakin' days of the year?

Our summers are blisteringly hot and humid.  Our winters are ass-kicking cold.  Both suck big time.

The problem is that while I have always hated the heat, as I've gotten older, I've gotten less and less tolerant of the cold.  I feel like I am turning into a big wimp.  I just can't bring myself to bike in the cold anymore and instead force myself to endure the misery of riding the subway.

On Tuesday, I tried to get on the subway on my way home from work just before 5pm.  Ha!  What a total nightmare!!  I stood on the subway platform for 30 minutes while train after train stopped in the station but was too packed to pick up any more riders.  Eventually, I went back up to the ticket agent and asked for my money back so I could leave.  Apparently they don't do that.  I stormed off and went back up to street level and just started walking in the freezing cold.  Even the street cars going by were too full to pick up more riders.  I walked about 7 blocks and finally PAID AGAIN and caught a northbound street car with space, went up to the east west line, took a subway west to our stop and another bus north to our street.  All in all, what should have taken no longer than 30 minutes, took me 90 minutes.  I vowed to ride my bike Wednesday.

Then I woke up Wednesday morning, heard the weather report and got out my subway tokens.  Um, minus 12 C with the wind chill?  No thanks.  Fortunately, all my trips were not right in the heart of rush hour but the damn transit system isn't cheap and it takes forever.  My bike is free and so much faster, but my resistance to the cold seems to be declining.

It's funny because I used to laugh when my dad would say his parents (who lived in Los Angeles for the latter part of their lives) didn't want to come to Canada to visit in the winter.  It just seemed so silly to me that they'd let the weather affect them so much.  Man, they were probably in their 60s at the time...I'm just 39 and already feel like an old fart when it comes to the cold.  Except I hate the heat too.  I guess I'm just a big whiner really.

Of course, since we don't plan to leave Toronto anytime soon, I have decided I have to just learn to accept the crap weather here.  I am trying to let go of my guilt and annoyance of relying on public transit instead of my bike and just accept that too.  Most Canadians don't bike in the winter, so why do I feel I have to?

Since the winter starts to bug me more after the holidays, I have decided to start a little gratitude exercise come January 1st.  Every day in January I will blog about something I am grateful for.  I am also thinking I will finally buy an LED mood lamp so that come February/March when I am so sick of the cold, grey weather that I feel like hiding under the bed all day, I don't fall into my usual late winter slump.

So have yourself a great cold weekend (or a not so cold weekend, if you are so lucky).
Posted by Healthy Life Lessons at 4:57 AM