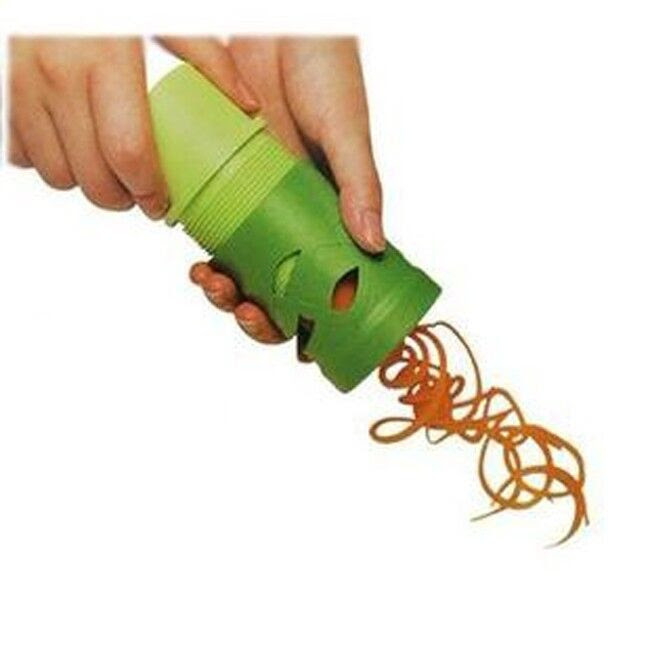 I have been dying to get a spiral slicer for ages.  Not because I want to start eating a raw diet.  Goodness no, that'll never happen!  But because I had a sneaking suspicion the girls would love spiral cut veggies.  And when the girls like veggies, I am very happy.

Unfortunately, the spiral slicers I see everywhere were pretty expensive, and since my suspicions about the girls preferences are sometimes wrong, I wasn't too keen on making the investment before I was certain it would be a hit.  Then I saw one for sale for like $10 on one of those group deal sites.  I purchased it immediately.

It's called a garnish cutter, so I guess it's not quite meant to be the same thing - or as sturdy - as the expensive ones, but I figured it was perfect to experiment with.

I started with cucumbers.  You have to cut everything into a fairly specific cylindrical shape and mount it on the spiky base.  Then you can choose from one of 2 cuts (one is more 'spaghetti' and one is more 'fettuccini' like).  Then you start to twist the 2 parts together.  It takes some elbow grease and hand/arm strength, but it did a fabulous job of the cucumber. 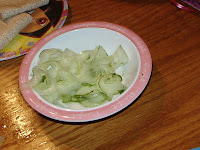 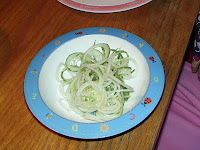 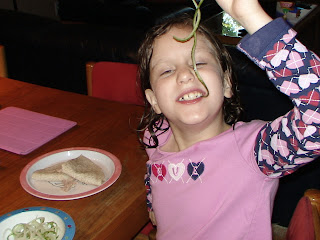 The girls adored eating the 'curls'.  But since they already love cucumber, I wanted to see if it would increase the appeal of something they are not as fond of.  I bought a big carrot, since they both blow hot and cold with carrots.  I didn't initially cut the carrots into perfect sized pieces, and the thinner end of the carrot didn't work well altogether, so I ended up with quite a bit that got wasted.  The pieces that did work, however, didn't stay stuck on the base very well and I had to remount them a few times.  It took significant strength to do the twisting with the carrot and the curls weren't as good as the cucumber ones.  Both blades turned it into like carrot coin spirals.  Nevertheless, the girls were delighted and munched the carrot curls enthusiastically. 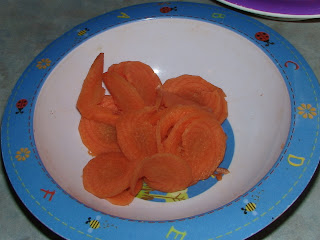 Unfortunately, I don't know what to try next since everything has to be a fairly particular shape. I suggested zucchini, and the girls - who don't eat zucchini - groaned.

Overall, I think if you want an inexpensive spiral cutter and will use it mostly for cucumber and zucchini, it's pretty good.  Otherwise, it probably is worth investing in a real one.
Posted by Healthy Life Lessons at 6:06 AM