It was a success.

I wish we never had to do it again.

We probably will.  Every year.  For at least another decade.

But the good news is, we definitely picked the best venue.  Honestly, if you live in West End Toronto, Bob Abate is an amazing place to have a party!  The gym is large, they supply tons of toys, climbing equipment and even a bouncy castle!  There is a kitchen right off the gym, and the staff are incredibly helpful.  It was awesome.

Awesome in a kind of, crazy, insane, ridiculous way.  In total, I think there were about 30 kids.  The volume was about 100 decibels, between the karaoke, the screaming, the bouncy castle, and the parents trying to chat over the din.  Given the energy level maintained by the kids over the 2 hour period, I'm actually very surprised no one got seriously hurt.  These kids were on fire!

I was, unfortunately, very disappointed with the baked goods.  Nothing I made turned out how I'd hoped.  The cake pops became 'cake balls'. 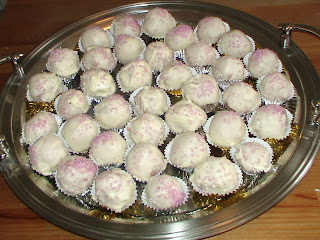 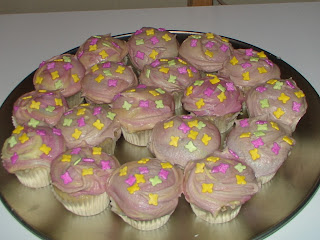 And the chocolate mini-cupcakes were made simply to make sure there was enough.  Hey, I am a neurotic, Jewish mother after all! 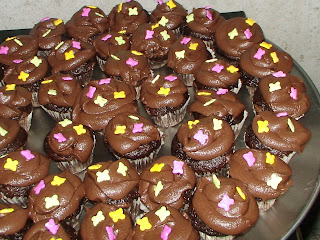 I've finally admitted to myself that not only do I completely suck at decorating cakes and cupcakes, but I also despise it too.  Nothing ever turns out as I intend and I find it incredibly stressful.  So next year I'm hiring out my sister-in-law to do it for me.  She loves doing it and is very talented.  And frankly, I'm done.  I think if I have to spend as many hours as I did this year decorating baked goods, I'll stab myself it the eye with an ice pick.

So there you have it:  The 4th and 7th joint birthday extravaganza for 2013.

I hope all you moms out there had a lovely Mother's Day.  Mine was fabulous, thanks.  I was greeted with beautiful cards and two smiling girls yesterday morning.  Then I went and taught my spinning class at the JCC.  Then lunch at home and Adam sent me out for my annual shopping spree.  I managed to find a great pair of shoes and a  few items of clothes that will be perfect for work this summer.  Then we headed to my in-laws for a BBQ.  But I think the best gift of all yesterday was that the girls were happy and cooperative, and most amazingly, they played together in the afternoon for about 2 and a half hours without any fighting.  I think that's a record in this house!