So how was your long weekend?  Ours was lovely, thanks.

Saturday we cycled to Christie Pits for some playground fun and popsicles.

Sunday we took the girls to an arts festival at the Distillery District.

Monday we had a park playdate in the morning and then we took the girls to Vaughan Mills in the afternoon.  Adam took them bowling while I cruised the mall.

Who doesn't love frosting?  My kids, like most kids, usually gobble it down and then leave the cake.

Personally, I like really sweet, sugary frosting, like fondant.  If it's more like sweetened whipped cream, that I don't want any part of it, that makes me gag.  I don't like marshmellow or boiling icings either.  Just the straight up powdered sugar kind.

I try to avoid sugar as much as possible, so I don't eat frosting very often these days.  So I was very excited to discover Swerve carries a powdered sugar alternative and even more excited when I found that it's now carried by Low Carb Canada!  It's made from erythritol, so it doesn't affect blood sugar, and it's calorie free.  And for those of you who avoid anything 'artificial', it's a 'natural' alternative sweetener.

For my first experiment with it, I combined a 1/2 cup with a 365g container of quark cheese (quark is like cream cheese, but it's much higher in protein and it's fat- and salt-free), a 1/2 tsp of vanilla extract and a squirt of vanilla stevia.  Then I iced a gingerbread cake I'd made.  It was fabulous!  Next time, however, because if I am going to eat frosting, I want it to be SWEET, I might use more Swerve, but I still thought it was pretty awesome.  I made the cake as a "Happy Mother's Day to Me" treat last weekend ;) 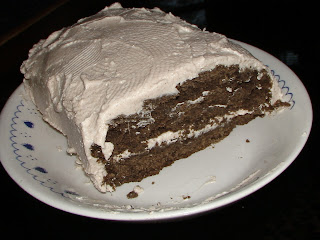 Of course no amount of frosting can sugar-coat the situation in Oklahoma today.  My thoughts are with everyone there affected by the tornado.
Posted by Healthy Life Lessons at 4:13 AM